What started out as a reasonably positive, risk-on week thanks to progress on trade agreements, ended up being disappointing by the time the closing bell rang in the US. 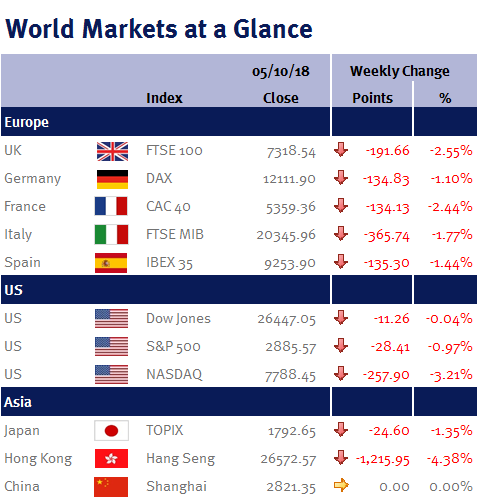 Donald Trump is getting trade deals agreed and signed. After signing a new agreement with South Korea (known as KORUS) last month, Donald Trump approved a revised NAFTA, which is now known as the US-Mexico-Canada agreement, or USMCA (which quickly spurred a number of jokes and is already better known as the YMCA).

On a serious note, this is very good news as it means a major tail risk for markets of rising protectionism has been reduced.

It should also have improved the chances of Donald Trump getting a deal done with China (hence why markets moved higher at the start of the week), however this week’s report that China had hardware hacked US companies certainly won’t help and may actually mean that the friction could get worse (hence the market sell-off during the latter part of the week).

Italy’s budget confrontation with the EU raised the risk of a debt crisis despite a later pledge to the deficit to 2% in 2021, while the oil price continued to strengthen predominately reflecting lower supply due to Iranian sanctions.

The continuing strength of the US dollar (as the Fed appears determined to keep raising US interest rates – please see here), is exacerbating the higher oil price for oil consumers. Consequently, in addition to the trade war, this is another headwind for many Emerging Markets (such as China, India and South Africa which are big oil importers) as they are now facing higher energy costs.

Elsewhere, while US employment data was weaker than consensus forecasts (nonfarm payrolls increased by 134,000 versus expectations of 180,000), it is best not to read too much into this as it is likely to have been distorted by Hurricane Florence (and so probably won’t deter the Fed from increasing US interest rates including in December). Interestingly, average hourly earnings slowed down to a 2.8% gain from 2.9%, suggesting that low unemployment (3.7%) isn’t generating excessive wage pressure.

In the UK, the benchmark 10 year gilt yield rose 15 basis points over the week to 1.72% fuelled by expectations of higher growth and inflation. For starters, Theresa May, in her closing speech at the Conservative Party conference, declared an end to austerity. Then Amazon announced it was increasing their lowest paid workers’ pay – and when added to rising oil/energy costs, there is an increasing risk of UK inflation. Furthermore, optimism is growing that a Brexit deal will be reached – and the BoE (like the US Fed), is clearly itching to increase UK interest rates if some sort of Brexit deal is agreed.

This coming week is very light on data; the highlights include UK GDP and US CPI. However, on Monday (8 October 2018), all eyes will be on China as their equity markets reopen after being closed all week for ‘National Day’ and are expected to play catch-up and reopen lower.