Beyond the political spectacle on Capitol Hill, the biggest event this week was Wednesday’s (26 September 2018) US Fed interest rate decision.

US policymakers increased interest rates by 0.25% from a range of 1.75%-2.0% to 2.0%-2.25%. The increase was expected. Consequently, all the attention was on Jay Powell’s (the Fed Chair) press conference: while the ‘dot plot’ (which shows where each policymaker thinks interest rates should be) for 2018, 2019 and 2020 was unchanged, surprisingly he didn’t sound too worried about trade wars.

As a result, the upshot I got from the press conference was that a December interest rate increase was effectively a done deal. 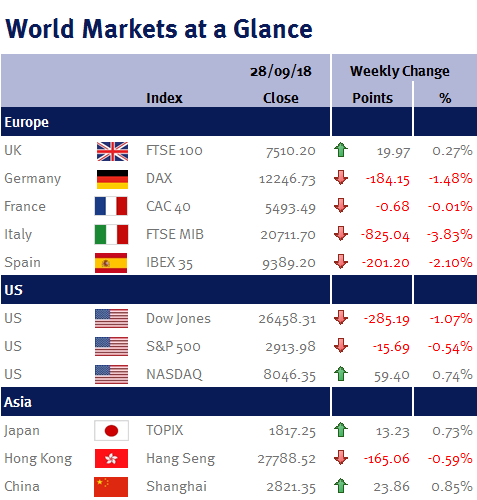 However, as I have previously stated, I would not be surprised if the Fed’s conviction in the need for significantly higher interest rates starts to decline given that US inflation remains elusive, coupled with the fact that we have yet to see the full impact of the trade war (and I find it hard to believe that the current uncertainty won’t start to negatively impact US business and consumer sentiment).

And on the subject of the trade war, this week showed no signs of any easing as the latest US tariffs on a further US$200bn worth of Chinese products kicked in on Monday (24 September 2018), while China cancelled their planned trade meeting with US officials.

In Europe, equities fell after the new Italian populist coalition government agreed a 2019 budget deficit of 2.4%, which puts it at odds with the EU as they want Italy to moderate its spending.

Elsewhere, Brent oil rallied over 6% to nearly $83 per barrel – the highest level in nearly four years.

While I am not expecting the oil price to return to the levels we endured between 2011 and 2014 ($125 per barrel), let alone the 2008 extreme of $145 per barrel, but given Iranian sanctions, supply disruptions (Venezuela and Libya) and careful supply management by OPEC and Russia, the path of least resistance does suggest we may see slightly higher prices in the short-term. However, I believe that shale explorers are the new swing producers, so a sustainable rally should be unlikely – while higher oil prices are good for those who produce it, it could slow economic growth as it is a negative for oil consumers.

There is not a lot of data out this coming week. Of significance is: US employment data (non-farm payrolls; unemployment rate; the participation rate; and average earnings); and eurozone retail sales and unemployment.

Additionally, expect some noise from the Conservative Party’s annual conference in Birmingham amid rifts over plans for leaving the EU.