The past week was a short one for markets, seeing the New Year ushered in and the majority of markets closed the week significantly higher. Whilst there was little by way of market news, the few bits there were, were extremely positive signals for the year ahead. 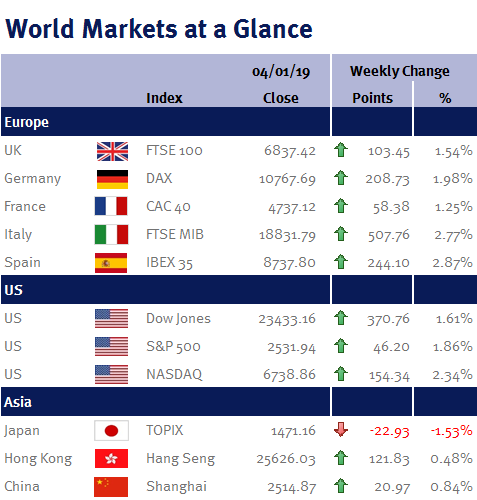 One cannot be complacent and ignore that 2018 closed the year with a tough few months, but that volatility in markets was somewhat unsubstantiated, driven by the uncertainty surrounding a handful of political events, namely trade frictions between the United States and China, the United States interest rate path and Brexit.

This uncertainty stimulated the fear that drove markets down, yet quality corporate balance sheets, valuations, and fundamentals in many geographic regions, all remained strong. It was this artificial downward pressure on stock markets that has made current opportunities across the board look so attractive.

To get back to the initial point, whilst this week was a slow burner for markets, head of the Federal Reserve, Jerome Powell, utilised a meeting with his predecessors on Friday to inject a much needed breath of certainty to global sentiment that saw the US Market surge strongly closing up 3.43%. He elaborated on his December statement by stating that whilst the winding down of their balance sheet was in what could be perceived to be ‘autopilot’; interest policy will remain active and accommodative in order to influence the economy, which could see them in no hurry to raise rates. Powell also stated that they will be considering all “downside risks” before taking any policy action, which would even include a reassessment of the current balance sheet wind down, if it was deemed to be causing an issue. This assurance that the Federal Reserve was placing an active backstop in supporting markets was all that was needed to see a rally in markets and a surge in bond yields.

The above message was also bolstered by an element of certainty injected into Brazilian politics, seeing their new President Jair Bolsonaro sworn into office. Whilst he is a controversial character in the public eye, his policies are extremely pro-business which will likely inject a lease of life into the region. In addition to this, unlike a number of his election campaign competitors and indeed predecessors, Bolsonaro has never been involved with corporate level corruption; the primary reason why he was victorious in the election. His vow to stamp down on corporate corruption has been seen as a huge positive to investors, seeing the Brazilian market rally further since his inauguration.

Elsewhere, we saw North Korea leader Kim Jong-un reiterate his commitment to denuclearise, extending the offer of a further summit with US president Donald Trump to negotiate further. This move by Kim has relaxed tensions and eased sentiment, removing an element of uncertainty. The date and location of a potential summit is yet to be decided.

In terms of corporate news, Tim Cook (Apple’s CEO) made a statement on Wednesday lowering revenue guidance for the company with iPhone revenues projected to drop by 15% in the first quarter. An unforeseen drop in demand for the iPhone in China was cited. This announcement caused the share price of Apple to drop over 9%, signalling potential for a healthy shift towards many more value orientated stocks seeing them outperform their growth counterparts significantly on the week.

In terms of data there was very little released. Chinese Manufacturing PMI (economic health of the manufacturing sector) came in below expectation, but in line with China’s shift towards a more service-driven economy, its Non-Manufacturing PMI (economic health of the service sector) came in higher than expected. This was accompanied by a further cut in China’s capital reserve requirement suggesting the government are committed to stimulating growth. Elsewhere, European Core CPI (inflation) came in at 1% which was in line with expectation and UK Manufacturing PMI significantly beat expectations (54.2%). US jobs data suggested a tightening, as whilst unemployment increased slightly, so too did the participation rate, with both average hourly earnings and change in payrolls beating expectations.

Whilst anticipation of positive steps towards US/China trade negotiations over the short term puts investors in a strong position, when coupled with all of the above, compressed valuations have the opportunity to be released.