There were positive noises on the outlook for US-China trade talks after China lowered tariffs on imported American cars from 40% to 15%.

Sentiment was also helped by the news that Canada had granted bail to Wanzhou Meng (Huawei’s Chief Financial Officer); while Donald Trump said he would consider intervening in the case if it helped get a deal with China.

While we are still a long way from an end to the US-China trade spat, the fact that positive steps are being made suggests that the two countries are on track to reach a trade deal – which should provide a better environment for risk appetite in the New Year. 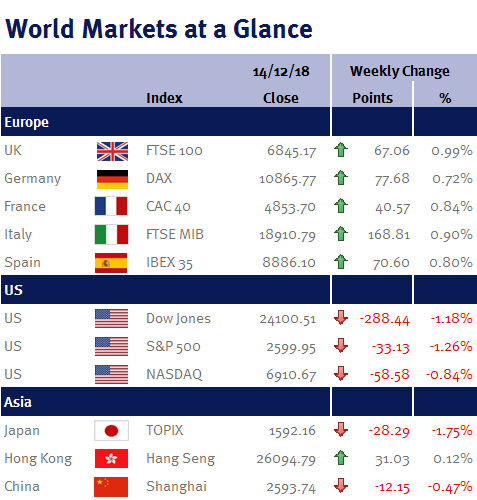 While the pick-up in core CPI reinforces my expectations for a US interest rate increase during next week’s Fed meeting (Wednesday 19 December 2018); given the risks to the inflation outlook are weighted to the downside (for example, the oil price has fallen 30% since the start of October). This suggests that inflation certainly isn’t going to create any urgency for the Fed to increase interest rates much further (if at all) during 2019.

In the UK, while Theresa May survived a confidence vote of Conservative MPs, there is still a risk of a Parliamentary vote of no-confidence brought by opposition parties.

Furthermore, Brexit is increasingly becoming a binary outcome: given the number of votes that went against Theresa May, it clearly shows how big a task she has ahead in getting her Brexit plan through Parliament, especially as her attempts to get better terms from the EU are currently falling flat. This suggests that the UK is either on course for a no-deal Brexit or no Brexit (as the European Court of Justice this week ruled that the UK can unilaterally revoke Article 50).

We also need to be mindful to the risk that the current chaos results in a snap election – as perversely this could be Theresa May’s best option of getting her withdrawal agreement approved (although this also increases the risk of a Jeremy Corbyn government – which would not be positively welcomed by financial markets).

In Europe, although the ECB opted to end its QE program, Mario Draghi, the ECB president, joined the US Fed in adopting dovish tone by stating that risks are now “moving to the downside” (because of a range of concerns over geopolitics, trade protectionism and market volatility). The change in language was also reflected in updated economic projections that lowered the outlook for inflation and economic growth (down to 1.9% for 2018 from 2.0%; and 1.7% in 2019 from 1.8%).

Please note
As news on the markets tends to quieten over the holiday season, our next Weekly Market Summary will be Monday 7th January 2019. We will of course provide you with a Market Update if any major changes or events happen in the meantime.

Best wishes for the festive season and the year ahead.