Brexit obviously took centre stage this week and while the media’s portrayal of all the Brexit fandango has been that Theresa May’s draft deal was ‘dead on arrival’ at Parliament, given the procession of resignations, it should be appreciated that it will take a very brave MP to reject the economic security of her compromise arrangement – especially given that it is not clear if an alternative deal is achievable, whoever the Prime Minister is. Additionally, rejecting the deal would mean MPs risk a no-deal Brexit or no Brexit at all.

Consequently, despite the flood of negative Brexit headlines, I personally (at the time of writing – Friday evening, 16 November 2018) can’t see Theresa May being deposed – and as I wrote yesterday in my Brexit update (please see here), I still believe that Parliament will ultimately endorse the deal (albeit with tweaks to appease the backbenchers). 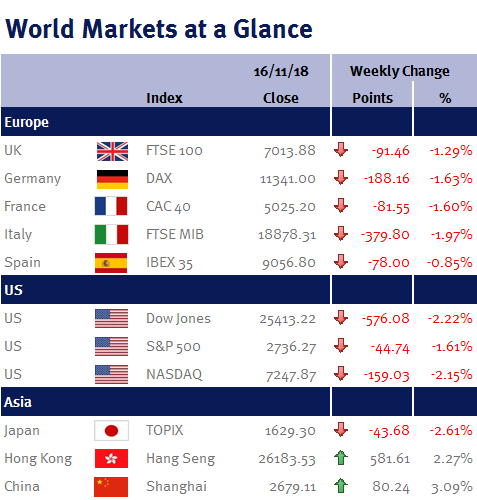 However, yesterday (15 November 2018), we saw just how much financial markets hate uncertainty as it started to price in the risk of a snap general election and a potential Labour government: shares in Royal Bank of Scotland fell 9.7% as Jeremy Corbyn has previously stated that he wants to break up the state-controlled bank; while shares in the utility companies such as United Utilities and Centrica (the owner of British Gas) fell around 5% as Jeremy Corbyn has pledged to nationalise the industry should he get in to power.

This week’s UK economic data hardly seems worth highlighting but even before this week’s heightened Brexit uncertainty, UK retail sales fell for a second month running in October. The 0.5% decline is a worrying sign ahead of Black Friday and the key Christmas trading period (unless of course it is simply consumers delaying purchases ahead of the Black Friday offers). Additionally, both the headline and core CPI inflation for October was unchanged (at 2.2% and 1.9% respectively).

In the US, the Fed Chairman, Jay Powell, did nothing to dissuade me that the Fed won’t increase interest rates again in December (its fourth increase this year) as he indicated the central bank would maintain its policy of raising short-term interest rates given that the US economy was “in a good place”. However, and more importantly, he subtly indicated at some potential headwinds that would result in a slower trajectory of interest rate increases, or even a pause: slowing overseas economies; fading fiscal stimulus in the US; and the lagged economic impact of the recent interest rate increases. Additionally, given there is a rising chorus of concern from business on trade, as I have previously indicated, Fed policy error could mean that the time difference between the end of this interest rate hiking cycle and the start of the next interest rate cutting cycle could be very short!

It is a quiet week ahead in terms of big data releases thanks to Thanksgiving, although we do have US housing starts and existing home sales.