While there wasn’t an awful lot of fresh information in the Fed minutes (the US economy is performing well, but the labour market is tightening), policymakers appear to have become more hawkish (i.e. favouring a restrictive monetary policy) than dovish (i.e. tolerating an overshoot in inflation).

Consequently, it is pretty clear that US interest rates will continue to rise. And as I said last week, this is where Donald Trump may turn out to be right: policy error by the Fed is a risk, as increasing US interest rates too fast and by too much will slow US economic growth and have a negative impact on companies. Personally, I believe the Fed would be better being patient in order to nurture and lengthen the ongoing jobs recovery. 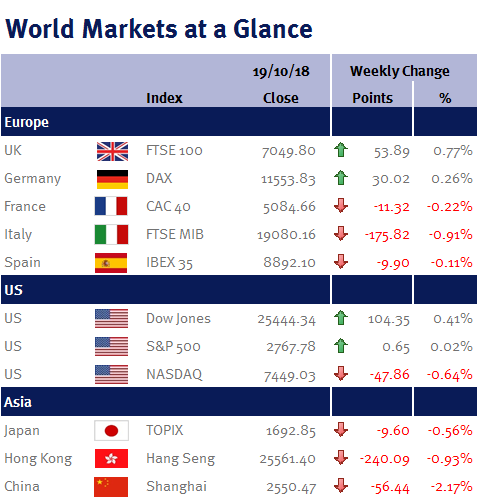 Chinese Q3 GDP growth slowed to 6.5% from 6.7% – the slowest pace since Q1 2009. On the face of it, this suggests the Chinese economy is suffering as the trade war with the US intensifies, however retail sales numbers surprised on the upside, climbing by 9.2% in September. Furthermore, economic growth should get a boost from a number of stimulus measures (for example, the central bank recently cut the reserve requirement ratio, RRR).

The UK was also in focus. September’s headline CPI inflation rate dropped to 2.4% from 2.7% in August, while the core rate (which excludes volatile items such as food and energy and is seen as a signal of where headline inflation will head) dipped below 2%.

UK unemployment was unchanged at 4% and while wage growth accelerated to 3.1%, the fastest pace since January 2009, it doesn’t necessarily mean that the UK economy is operating with very little slack. In the noughties, wage growth averaged nearly 4%. Additionally the uptick partially reflects the increases given to the public sector, following years with a cap on pay increases.

The strong UK retail sales we have seen over the hot summer came to an abrupt as food sales fell 1.5% in September – resulting in an overall decline of 0.8% from August.

Altogether, this UK data makes me again question why the BoE still feels the need to talk about increasing UK interest rates. Regular readers to my commentaries will know, I believe August’s interest rate increase was a policy error, given anaemic inflation-adjusted wage growth; a weakening housing market; and political and Brexit uncertainty – not to mention the fact that UK CPI inflation is converging with the BoE’s 2% target. Unfortunately, I would speculate that only a hard Brexit will stop the BoE increasing interest rates in 2019.

And on Brexit, unsurprisingly, the EU summit ended with no firm outcome on Brexit: the EU has a track-record of dragging decisions down to the wire and as a consequence, I expect everything will remain in limbo until the 11th hour, or even beyond!

Brent crude fell to $80 per barrel despite Saudi tensions, after US data indicated stock piles were building. However, I believe this is more likely due to seasonality and the US’s inability to export more oil (due to port limitations/large crude carriers). Iranian sanctions are likely to result in shortages and will underpin the oil price in the short-tem, unless Saudi Arabia and Russia increase production.

Looking ahead to next week, there are only a few major releases to keep an eye on: US Q3 GDP; ECB’s monetary policy meeting; and Chinese new home prices data. In addition Poland holds local elections on Sunday (21 October 2018).