There was a lot of news flow this week and equity markets responded positively, the US touched record highs whilst China and Japan posted their best weekly returns in two years.

The US announced that with effect from next Monday (24th September), they will impose tariffs on an additional £200bn of goods imported from China. Starting at 10%, and rising to 25% in January 2019, the initial levy is lower than anticipated and the delay gives businesses time to shift production back to the US. Whilst this will help Donald Trump’s campaign in the build-up to the US mid-term elections (bringing jobs back to America), the products included in this next round of tariffs are likely to hit the pockets of consumers in the US and so could weigh on sentiment. 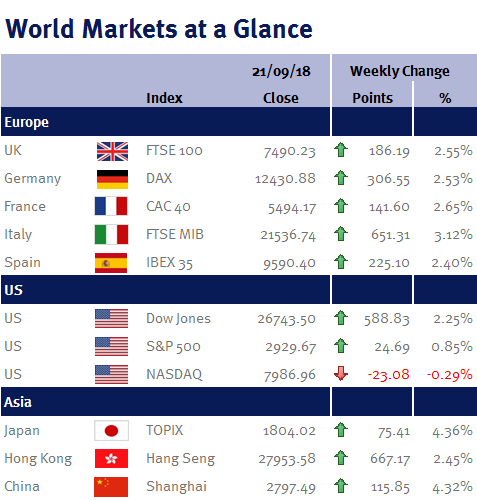 From next week, around half of all goods imported to the US from China will be subject to tariffs and despite Trump’s threat to tax the remaining half should they retaliate, China did not back down. They announced an additional $60bn of tariffs to be levied on US imports, again taking effect from next Monday. China’s new tariffs will be levied at rates of 5% or 10%, depending on the product, but again is lower than the 5% to 25% range they threatened last month. China’s response was not limited to additional tariffs; whilst they confirmed they would not weaken their currency (which would increase the appeal of their exports), they did commit to a raft of measures which would support economic growth, including a VAT cut; an overhaul of individual income tax; cuts to import tariffs (for the majority of its trading partners) in addition to reaffirming their commitment to infrastructure investment.

Japan’s Prime Minister (Shinzo Abe) secured another three year term as leader of Japan’s Liberal Democratic Party this week after winning 553 out of a possible 810 votes. With lower house elections not due until 2021, his margin of victory should give him the confidence to continue his economic stimulus program. Today (Friday 21st September) Japan’s headline inflation for August was reported at 1.3%, coming in above expectations of 1.1%, lifted by fresh food and energy. Core inflation, which strips out these more volatile measures, was in line with expectations at 0.9% and earlier in the week, the Bank of Japan maintained their hugely supportive monetary policy and reaffirmed their 2% inflation target.

In Europe, manufacturing PMI came in below expectations and at 53.3 it was the lowest reading in two years. According to the survey, the auto industry (which has been targeted by the US) is taking the brunt of the slowdown, that is despite data earlier in the week showing a record 31.2% increase in new car registrations in August, although, this was likely an anomaly due to a new EU fuel consumption and emissions test applying to all new EU car registrations from September 2018.

Finally in the UK, Sterling had a roller coaster week; inflation data on Wednesday caused some volatility as CPI at 2.7% was above expectations. Whilst this is towards the upper end of the Bank of England’s target, the gains came from more volatile categories and so this reading alone is unlikely to influence the Bank’s future monetary policy decisions. Retail sales data for August helped lift the currency on Thursday; after a strong July, expectations were for a 0.2% fall in August but continued warm weather bolstered sales of household goods and led to a gain of 0.3% over the month. However, the Pound’s elevation was short lived as it emerged late on Thursday that the EU had rejected the UK’s BREXIT proposals and warned that time is running out for striking a deal. Then today (Friday 21st September) Theresa May’s statement caused a sharp fall in Sterling as she said she is unwilling to move any further and is ready to leave the EU without a deal.

BREXIT will continue to feature in the week ahead as Sunday sees the start of the UK Labour Party conference and later in the week, the 27 members of the EU (ex the UK) will meet for discussions. Next Wednesday the Fed is expected to raise US interest rates and Shinzo Abe will meet with Donald Trump to discuss trade. Data out next week includes US and UK GDP, European inflation, US PCE and Chinese Caixin PMI.