There was a distinct lack of exuberance shown by equity markets this week to news that Steven Mnuchin, the US Treasury Secretary, had offered to restart talks with China in order to de-escalate the trade spat.

While this was disappointing, it was understandable given last week’s US employment data, coupled with the fact that it is Donald Trump and not Steve Mnuchin in the driving seat – and of course, he could easily decide to impose further tariffs on China in advance of any talks (and use their removal as a carrot). 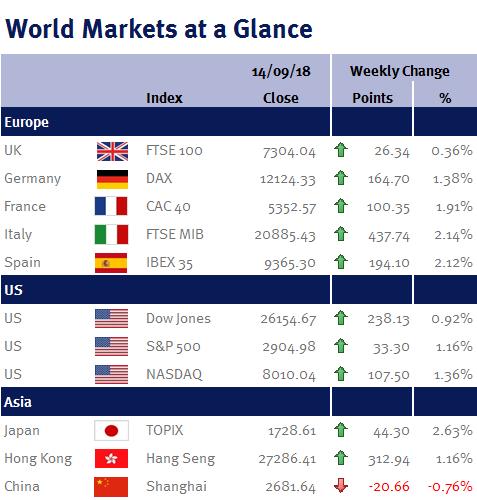 Interestingly, while last week’s US employment data showed wage growth had picked up (giving a green light to the Fed to keep progressing on its higher interest rate path), this week’s US core CPI fell to 2.2% from 2.4%. Furthermore US PPI showed its first month-on-month decline in eighteen months. This suggests to me that inflationary pressures are far from rampant in the US and, as I have previously said in these weekly summaries, I would not be surprised if the Fed’s conviction in the need for higher interest rates starts to decline.

As expected the BoE left interest rates unchanged this week, while the accompanying minutes had a slightly dovish tone due to comments on Brexit uncertainty. Consequently, I was therefore gobsmacked to read that the BoE Governor, Mark Carney, told cabinet ministers yesterday (Thursday 13 September 2018) that a no-deal Brexit would probably see UK interest rates rise!

While I appreciate that leaving without an agreement is likely to lead to a weaker pound and thus higher inflation, I believe the BoE is more likely to cut interest rates to support the economy, just as they did following the EU referendum in 2016. This is especially true if, as Mark Carney also told the Cabinet; ‘house prices could fall by up to 35% in a worst-case chaotic no-deal exit’, as this would have a significant negative impact on consumer confidence – which in turn would act as a massive drag on UK economic growth as the consumer accounts for around 60% of the UK economy.

In Europe, the ECB also left interest rates unchanged and reiterated its commitment to keeping rates unchanged “at least through the summer of 2019”. The ECB also lowered its growth forecasts for this year and next (to 2% and 1.8% from 2.1% and 1.9% respectively). CPI inflation forecasts stayed the same at 1.7% for 2018, 2019 and 2020.