Emerging Markets concerns continued to weigh on sentiment this week.

While every journalist was busy expressing their concerns about Emerging Market contagion and making similarities with the 1997 Asian financial crisis, it is advisable to take step back and double/triple-check the fundamentals rather than get sucked along with the herd. 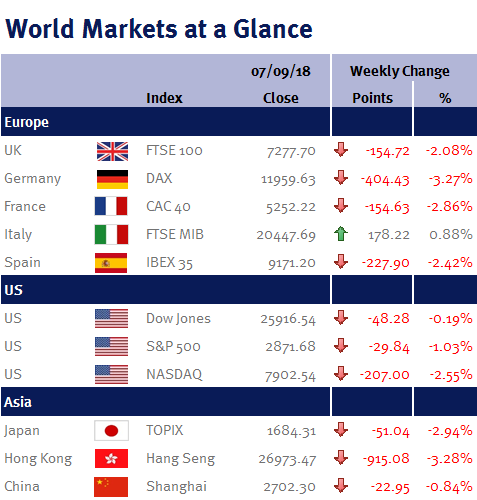 During my Investment career, I have learnt that if you’re going to panic, panic early – and while I am not overly sanguine, I am not panicking.

Yes, contagion risks can’t be ignored (and aren’t being ignored) given the global trade spat, a strengthening US dollar and the prospect of an acceleration in US interest rate increases. However, the pressure on Emerging Markets has so far been mainly concentrated on the weakest developing countries: Turkey (currency weakness and worsening relations with the US); and Argentina (policy error – despite higher inflation, interest rates were initially cut – which put pressure on the currency and the need for IMF support). Brazil (political crisis) and South Africa (land-reform) have also been impacted.

Fundamentally, global growth is solid, corporate earnings are positive and liquidity easy (despite higher US interest rates, monetary policy is still accommodative), which is supportive of Emerging Markets and suggests to me that the contagion theme is well overdone. Additionally, currency weakness (versus a strong US dollar) should provide an economic boost to most Emerging Market countries (providing their inflation is reasonably low/stable and their external debt isn’t large).

Furthermore, if the Fed was to pull back on the speed of its tightening, it would be positive for Emerging Market sentiment (as I stated two weeks ago, please see here, while a September increase in US interest rates is probably a done deal thanks to recent solid US economic data, I would not be surprised if policymakers’ conviction in a December increase abates).

However, given the turmoil embroiling Donald Trump and the White House, there is a risk that Donald Trump will use foreign policy and trade announcements to distract attention and signify his authority and leadership, for example by hitting China with new tariffs – which would negatively impact markets.

Elsewhere, during his testimony to the Treasury committee, Mark Carney said that he was open to extending his tenure as Governor of the BoE beyond June 2019 in order to provide continuity during Brexit.

I am not sure why, but the announcement was taken positively by the markets. While I am not saying he hasn’t done a good job during a difficult period, during his tenure as the BoE Governor, Mark Carney has flip-flopped numerous times on when and why interest rates may be changed – hence his ‘unreliable boyfriend’ nickname.

In addition, Mark Carney has recently shown some hawkish tendencies – and as regular readers to my commentaries will know, I believe last month’s interest rate increase was a policy error, so personally I would prefer a new, more dovish person as governor.

That being said, Brexit is currently the main driver of UK monetary policy – and if we do end up with a no-deal Brexit, it will actually be completely irrelevant who is governor of the BoE, as they won’t be in a position to be proactive, but instead will simply have to react to the resulting economic impact.

Data wise this coming week we have UK unemployment data and wage growth; and US retail sales and CPI. Additionally, the BoE and ECB have monetary policy meetings.