The announcement of a bilateral trade deal agreement between the US and Mexico pushed equities higher as optimism grew that the global trade war was now potentially getting closer to ending as Donald Trump could now progress talks with China, Canada and the EU.

However, this optimism meant that the market was caught off-guard when Donald Trump rejected an EU offer to scrap tariffs on cars and said that he wants to impose tariffs on $200bn of Chinese imports as soon as a public-comment period concludes next week (so far the US has only imposed tariffs on $50bn of Chinese goods).

In the UK, the pound strengthened thanks to comments from the EU Brexit negotiator, Michel Barnier, who implied a Brexit deal was close when he said the EU is prepared to offer the UK an unprecedented partnership. As I highlighted last week, there is an inverse relationship between the pound and the FTSE 100 – and so as the pound strengthened, the FTSE-100 sold-off. 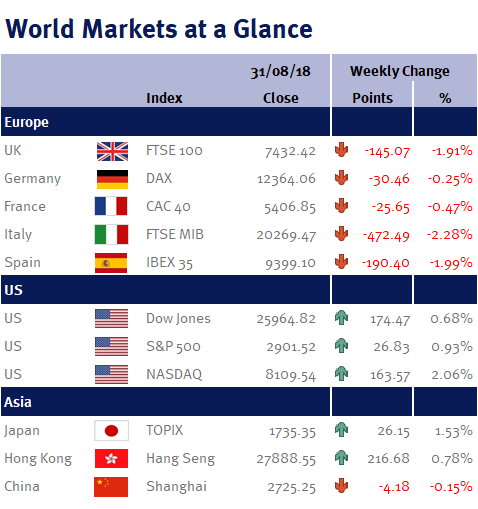 Anyway you cut it, the outlook remains uncertain (although it’s always darkest before the dawn). As I have previously highlighted, from Donald Trump’s perspective, he’s winning the trade war, so why wouldn’t he continue to be aggressive and push for more? Tariffs are politically popular in the US – and as a result, Donald Trump has seen his approval rating rise ahead of November’s mid-term elections. Additionally, the economic damage (so far) to the US economy has been minimal, or non-existent if you look at the performance of US stock market (and Donald Trump has on several occasions tied his Presidency to the stock market performance)!

As for Brexit, I think the markets may have got a little too excited by Michel Barnier’s comments. He didn’t provide any details or action points – not to mention that it would need support from the UK (and this may be difficult given the potential need for additional compromises, especially given many MPs already oppose the concessions in Theresa May’s Chequers proposal), so a no-deal Brexit is still a possibility.

Elsewhere, the second reading of last quarter’s US GDP showed the US economy expanded slightly faster than previously estimated (4.2% from the initial reading of 4.1%), as investment, net exports and government spending were all revised higher, while the core PCE index (the Fed’s preferred inflation measure) rose 0.1% to finally hit the Fed’s 2% target (the first time since April 2012).

Highlights for this coming week include: US employment data (non-farm payrolls; unemployment rate; the participation rate; and average earnings); and US, UK, eurozone, Japanese and Chinese PMI data.