Thankfully, global equities ignored all the legal drama in the US and ended the week marginally higher – giving us a break from what has been a difficult month. 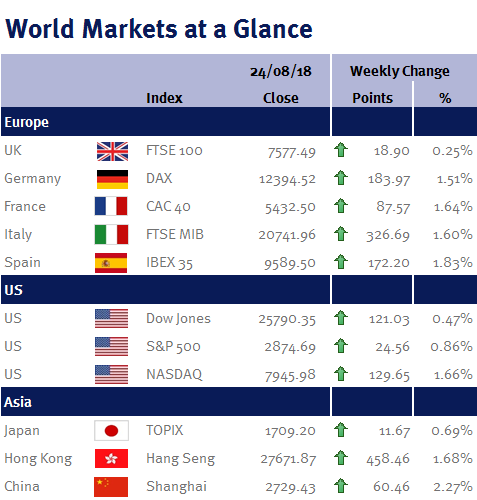 Fed minutes on Wednesday (22 August 2018) showed the US central bank intends to maintain a
gradual pace for interest rate increases.

However, while the minutes effectively reinforced their plan for four interest rate increases this year (making a September increase a done deal thanks to recent solid US economic data), I would not yet bet on a December increase as these minutes predate the recent turmoil in Turkey and other emerging markets.

In fact, I would not be surprised if we see a slight waning in policymakers’ conviction over the coming months, especially if the trade war intensifies – although tariffs provide upward pressure on inflation, they will hurt US business sentiment, investment spending and employment.

It is difficult to say if this week’s raft of “no-deal Brexit” documents from the UK government is good advice (albeit long overdue) given the lack of progress in negotiations to date, or whether it is a negotiating tactic (as it potentially strengthens Theresa May’s chances of winning support for more compromises and thus the chances of a soft Brexit).

Interestingly, the pound appreciated this week despite the increased talk of a no-deal Brexit (which would result to a sharp fall in the pound). Nevertheless, it is probably still too soon to see the pound move materially lower as Brexit negotiations have so far been unpredictable. And while it may be weak logic, I believe a Brexit deal will eventually be agreed on as it is in everyone’s interest to reach a compromise – although we probably won’t have a definitive answer until October, which is the long-planned deadline for a deal as it coincides with an EU summit. As an aside, since the EU Referendum we have seen an inverse relationship between the pound and the FTSE 100 – so counterintuitively, a no-deal Brexit may give the FTSE 100 a boost, as a weaker pound increases returns for exporters and overseas earnings!

We have a fairly skimpy week ahead in terms of economic data. The main highlights include: US PCE (the Fed’s preferred inflation measure); eurozone CPI and unemployment; Japanese CPI; and Chinese PMI.