Yet another relatively quiet week for economic news… that being said, there have been a few interesting elements worthy of consideration that have impacted broader global markets. As you will recall from last week’s article, the primary driver of markets was the flailing relationship between the US and Turkey, in addition to the collapse of the Turkish Lira. Wind forward a week and this, whilst not insignificant, is beginning to look like what it is; short term market noise. We have seen a slight recovery in the Lira which has injected more certainty into European banks, and the plague of ‘short’ investors into the Turkish economy/currency has subsided. Whilst Turkey still has economic issues in addition to political contentions with the US (seeing the US commit to maintaining sanctions) following its finance minister, Berat Albayrak, recognising all of the country’s economic issues in a speech on Thursday, global markets began to refocus on what is important; global trade, valuations and economic fundamentals. 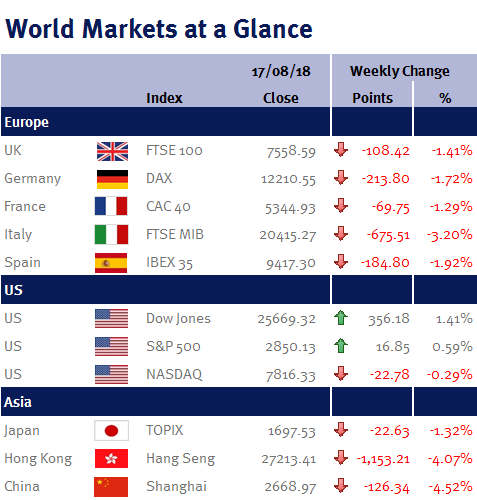 With that in mind, sentiment picked up throughout the week after trade tensions between China and the US seemed to ease, seeing the dollar and treasuries stabilise somewhat. This easing of trade tensions injected an element of positivity into a quiet market that had been plagued by the Turkish debacle! It is important to not be complacent however, as whilst the US and China agreed this week to further negotiations, there is still some way to go… and any agreement that involves either side backing down on key points seems unlikely to happen ahead of the midterm elections in the US, with Donald Trump wanting to ‘chalk up’ trade as a success.

Thursday saw the UK and the EU engage in further Brexit negotiations, with the issue of the Irish border again proving to be a sticking point. However, whilst further negotiations are to take place, it was the UK Foreign Secretary Jeremey Hunt that hit front pages, playing up the risk of a ‘no deal’ Brexit… before backtracking and stating that Britain could prosper without a deal. Ultimately it is important to see through this rhetoric and look at the uncertainties that remain, and without a firm deal in place, from an investment standpoint the majority of the FTSE100 being overseas earners is a crucial positive to mitigate volatility.

By way of an abstract piece of news, with the Brazilian elections due to commence in October, the leading candidate Lula Da Silva formerly registered his candidacy on Wednesday. What is interesting is that Lula was imprisoned in April of this year after being found guilty of money laundering and corruption. Whilst the law states that an incarcerated individual cannot run for president, they can legally register to run, taking months before courts are able to reject their bid. Lula has the backing of over a third of the voters, with protests continuing to take place over his arrest. Whilst this is not a market moving event, rather one of interest and uniqueness, once there is more certainty over who is legally running for the presidency, it could inject an air of much need certainty into a Brazilian market that is becoming undervalued.

Outside of the few key political events, there was a raft of inflation and trade data released this past week. On Tuesday French and German CPI came in on expectation (2.3% and 2% respectively), seeing inflation in broader Europe also in line with expectation at 2% today (Friday), suggesting a strength in the core demand despite shorter term uncertainty surrounding trade and the Turkish economy. UK inflation data was also in line with expectation at 2.5% when released on Wednesday, marginally higher than prior. US industrial production for July missed expectation suggesting the impact of trade tensions are starting to show. However, for US smaller companies where this is less significant we saw ‘small business confidence’ data come in considerably higher than expectation at 107.9. On Thursday we saw the Indian trade balance come in more negative than anticipated, with rising fuel prices for one of the world’s biggest oil importers the primary cause. As such, the Indian government has announced plans to counteract this by increasing ethanol content in fuel.