It could be argued that this week has been one of the quietest weeks in terms of volume of economic news that we have seen in 2018… that being said, there has been a handful of influencing factors and data sets that have governed markets. 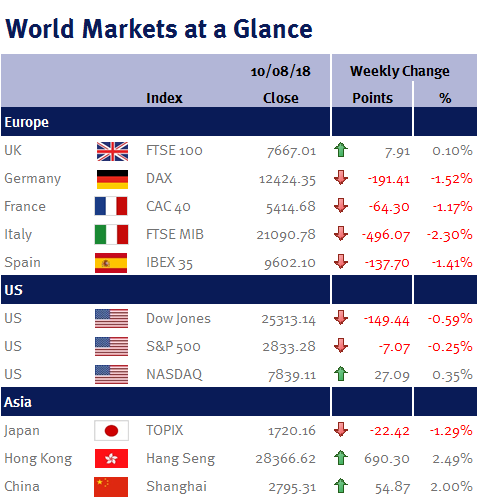 Key for the UK were comments early in the week from the UK trade secretary and Brexiteer, Liam Fox, claiming that the chances of a ‘no-deal’ Brexit were increasingly likely; standing at “60-40” due to the “intransigence” of the Brussels machine. As you will know from my summary last week, these comments from Fox came hot on the heels of concern from the Bank of England Governor, Mark Carney, who echoed similar concerns over a ‘no-deal’ Brexit. Fox’s comments didn’t impact stocks greatly, with the FTSE closing the week slightly higher. That being said, Sterling weakened significantly against most currencies and in particular dropped from 1.30 to the US dollar to just over 1.27 this week alone; falling from 1.43 since April. Strong industrial production and manufacturing data, and robust growth (1.3% GDP) all released today (Friday) saw sterling climb at the margin, but Brexit uncertainty, whilst appearing to elude the FTSE100 year to date, appears to be catching up with the currency!

With the above currency fluctuations in mind, the Russian Ruble depreciated significantly on Thursday following a somewhat delayed set of sanctions imposed by the US in response to the Novichok nerve-agent attack in Salisbury (UK) in March of this year. Whilst it does appear strange that these sanctions come in the wake of US President Donald Trump’s pursuit of improved relations with Putin’s Russia, it is not Trump who moved for these sanctions as Congress, whilst controlled by the Republican Party, has limited Trump’s power to ease sanctions on his own.

Elsewhere we saw Emerging Markets, European markets and their currencies fall today (Friday) off the back of what appears to be a fear of contagion from the crisis in Turkey, and concern that a slide in the Turkish Lira will spill over into European banks. Following the Human Rights sanctions imposed by the US on Turkish ministers last week, coupled with increasing Turkish inflation levels and concern of a financial crisis in the country, the economy seems in disarray. However, whilst we would not be so bold as to say we anticipated specifics, the volatility apparent in the Emerging Market and European asset classes caused by the ‘noise’ in Turkey is just an example of how, when coupled with low volumes traded in the typically quiet summer period, it can cause fluctuations in wider markets. However, whilst the summer period will likely be littered with noise, this can compress market valuations making them look incredibly good value for when volumes re-enter the market at the end of summer (or come the US mid-term elections in November at the latest).

There was a handful of economic data out this week which showed that fundamentals in core markets remain robust. Monday saw Eurozone investor confidence beat expectations, coming in at 14.7 (1.3 points ahead of expectation). China released its trade data on Wednesday with both imports and exports beating expectations. This was supported by strong inflation (CPI) data released on Thursday and increased Chinese foreign reserve levels ($3.1 trillion) released today (Friday), rebuffing sentiment that suggested trade frictions with the US would compress trade through the summer months.

As an aside, Thursday saw the US Vice President, Mike Pence, announce a 5 year, $8 billion programme to launch a US space force as a further arm of their military… however, before thoughts of Captain Kirk battling Klingons in deep space come to mind, the programme is ‘deflatingly’ a further extension to current measures designed to protect satellites, defend from land to air attacks, and to garner intelligence.