In a week that opened with only the third Brit in history winning the Tour de France, it seems somewhat fitting that we saw a marginal rate rise in the UK for the first time since 2017. On Thursday, the Bank of England (BoE) raised the Bank Rate from 0.5% to 0.75%, its highest level since 2009. Whilst this move was largely anticipated, the hawkishness of the BoE’s Monetary Policy Committee members was not, seeing them vote 9-0 to raise rates. However, the proceeding press conference did shed some light on why, with the banks head, Mark Carney, citing strong economic conditions as rationale whilst also raising its UK growth forecasts. Whilst it is hard to say whether this is a policy error at this stage, Sterling sold off; suggesting the market believes the BoE has made a folly… that being said, and despite Thursday seeing Carney suggest that a disorderly Brexit was not a key concern, today (Friday) he stated that the possibility of a ‘no-deal’ Brexit was “uncomfortably high”. If one ignores all of the vocal rhetoric, it very much appears that Thursday’s rate hike was largely driven by fear of the Brexit unknown, with the BoE increasing rates through worry of it being their last chance to do so ahead of a 2019 exit from the EU. With that in mind, and whilst there is uncertainty surrounding Brexit, it was made clear by Carney that the BoE will not rush rate decisions. This suggests rates will remain lower for longer, and whilst there has been an increase, it will likely be the only one this side of a March 2019 Brexit! 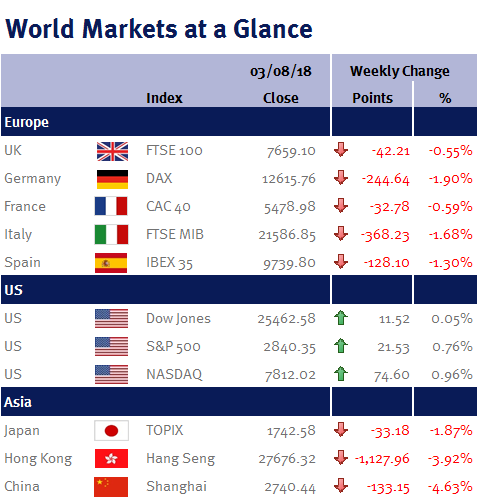 On Tuesday, the Bank of Japan (BoJ) also had its policy meeting with its headline interest rates remaining at -0.1%. Broader policy also remained unchanged, however the BoJ Governor, Haruhiko Kuroda, stated that they would loosen their grip on policy allowing the yield on the 10 year government bond to drift between -0.2% and 0.2%. This allows the BoJ to remain accommodative whilst not boxing themselves into a corner when it comes to debt purchasing… a flexibility that will be key in light of not only future trade relations with the US, but also as the newly founded EU-Japan Economic Trade Partnership gathers momentum.

Whilst there has been a plethora of negative press surrounding inter country political relations, this week has seen arguably a slightly more tempered set of talks. At the beginning of the week, US president Donald Trump met with Italian Prime Minister Giuseppe Conte, with the former heaping praise on the other for his statement about ending immigration. Trump stated that the relationship with Italy is a partnership that would lever against the dominance of Germany and France, a statement which will frustrate the German Chancellor Angela Merkel. Monday also saw UK Foreign Secretary Jeremy Hunt meet with his Chinese counterpart Wang Yi, and whilst the diplomatic mission had a rocky start with him accidentally describing his Chinese wife as Japanese, the visit was extremely positive. There was common ground likening the UK’s relationship with Europe to Hong Kong’s relationship with the rest of China, and a commitment to strengthen ties over time. This is hugely positive for both countries given recent US trade and Brexit uncertainties.

Elsewhere we saw the US Federal Open Market Committee leave headline interest rates unchanged on Wednesday, whilst also upgrading its economic assessment. Its Chair, Jerome Powell, stated that any further rate hikes will be in line with further economic expansion and stronger labour market conditions… leading the broader market to price in a further rate rise in the US in September. US data released today (Friday) went on to support this with unemployment decreasing to 3.9% and participation remaining static.

As an aside, on Thursday Apple shares climbed over 2.9% seeing it become the world’s first ever trillion dollar company. This came following the release of Apple’s third quarter results earlier in the week, seeing their strongest June quarter to date; driven by sales of iPhones, services and wearables. This is yet another sign that the long term ‘doom and gloom’ portrayed by the media over trade is not a true reflection of the market!!