Global equities ended the week higher helped by a cease-fire in the US/EU trade war.

The de-escalation in Donald Trump’s rhetoric with European President, Jean-Claude Juncker, was essential as it is becoming obvious that tariffs are starting to hurt (GM, Whirlpool and Boeing were among the US companies recently warning that the escalating global trade war is driving up the costs of raw materials). 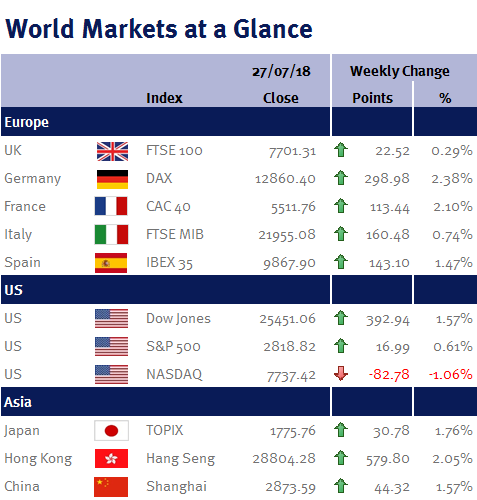 While the two sides only agreed to expand European imports of US LNG and soybeans and to work together towards zero tariffs, it was enough to allow Donald Trump to claim victory.

However, I wonder if this simply allows Donald Trump to ratchet up the pressure on China, as fighting a trade war on multiple fronts makes little sense. Furthermore, ahead of the mid-term elections, he will want to show the US electorate that his strategy is working, especially as the US economy is strong (please see below). And, unfortunately, that makes the prospect of Donald Trump’s proposed additional tariffs on $200 billion of Chinese goods more likely than not to be implemented next month.

Equity markets were also helped by positive corporate earnings (with the notable exception of Facebook which missed revenue and user growth estimates), coupled with a series of steps by China to stimulate its economy (authorities unveiled a package of measures to increase infrastructure spending and domestic demand).

Elsewhere, yesterday (Thursday 27 July 2018) as expected, the ECB left eurozone interest rates unchanged. At the accompanying news conference Mario Draghi, the ECB President, said that the ECB will stick to its plan to end bond purchases at the end of the year and reiterated his pledge to keep interest rates unchanged “at least through the summer of 2019”.

We have a busy week ahead. In the UK, 2 August 2018 is ‘Super Thursday’ – so called because the BoE’s interest rate decision and minutes will be accompanied by the Quarterly Inflation Report. Market consensus is for an interest rate rise of 0.25% to 0.75%. Regular readers will know that I believe that this will be a policy error: the UK economy doesn’t look healthy thanks to weak consumer (stagnant inflation-adjusted wage growth and a weaker housing market) and business (political and Brexit uncertainty) confidence, not to mention that UK CPI inflation will soon converge with the BoE’s 2% target.

Both the Fed and BoJ have monetary policy meetings (both central banks are likely to leave interest rates unchanged). Additionally we have: US PCE (the Fed’s preferred inflation measure); US employment data (non-farm payrolls; unemployment rate; the participation rate; and average earnings); eurozone CPI; eurozone Q2 GDP; and Chinese PMI.