Global equities were broadly flat on the week after the Fed Chair, Jerome Powell’s testimony to Congress produced nothing to upset markets (gradual tightening remains the Fed’s plan as the outlook for the US economy is positive and inflation is contained, while a trade war poses challenges).

The Fed’s beige book report on Wednesday (18 July 2018), echoed Jay Powell’s concerns, as it noted that manufacturers in all of the Fed’s 12 regional districts were expressing concerns about the impact of tariffs, including higher prices and supply disruptions. 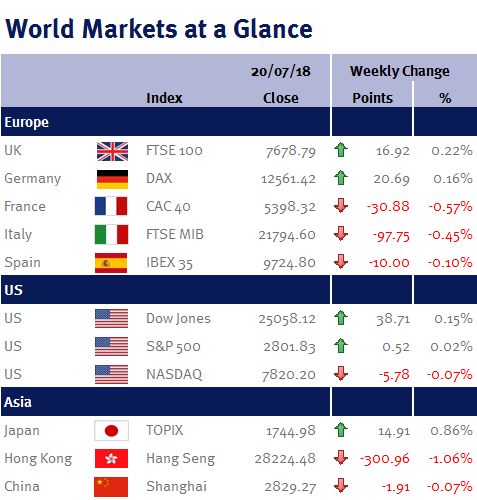 UK CPI inflation stayed at 2.4%, surprising economists who had expected the rate to accelerate due to higher fuel prices. Although the cost of filling up rose by 2.2% and electricity and gas prices increased 2.3%, the impact of this was offset by clothing and footwear prices which fell by 2.1% between May and June, coupled with lower food, alcohol and tobacco prices.

Core CPI inflation (which excludes volatile items such as food and energy and is seen as a signal of where headline inflation will head) slowed to a 15-month low of 1.9%.

This data ensures the next BoE meeting on 1-2 August 2018 will be tense, especially as it was the BoE’s chief economist, Andy Haldane, who at the last BoE meeting voted for an increase in interest rates (please see here), citing the risk of stronger-than-expected wage growth and inflation – neither of which are materialising!

Interestingly, retail sales fell 0.5% in June (which doesn’t bode well as the consumer accounts for around 60% of the UK economy) – although admittedly, monthly sales data can be volatile and this coupled with the excellent summer weather and World Cup may have had an impact.

While the market consensus is still expecting an August interest rate increase, I still currently believe any increase in UK interest rates this year would be a policy error. Strictly speaking, with UK CPI inflation starting to converge with the BoE’s 2% target, there is actually no need to raise interest rates. Additionally, inflation-adjusted wage growth is effectively stagnant (which is clearly squeezing households); while a weaker housing market and political/Brexit uncertainty will act as an additional drag on UK economic growth. However, if the BoE does increase interest rates, it is highly likely be a one-and-done move for 2018 as Jonathan Haskel, who replaces Ian McCafferty on the MPC in September, has stated that he sees risks if the BoE increases interest rates too quickly as there may be more slack in the labour market than people think.

Furthermore, oil prices have weakened over the past few weeks – and this will help to lower inflation further. Having trading near $80 at the start of July (its highest since November 2014), Brent crude has fallen back below $73 due to trade war fears, coupled with OPEC’s increased supply and Donald Trump’s announcement that he was considering utilising some of the 660m barrels of oil in the Strategic Petroleum Reserve to tame rising fuel prices ahead of the mid-term elections in November.

This coming week from the US we have, home sales; the University of Michigan Consumer Sentiment; and Q2 GDP, while from Europe, we have an ECB monetary policy meeting; PMI; and consumer confidence.