While UK political chaos and Brexit uncertainty stole the show this week, it was Donald Trump that moved equity markets.

Global equity markets had a positive glow at the start of the week thanks to a lull in the trade war coupled with a continuation of positive economic data – unfortunately, markets hit a speed bump mid-week after Donald Trump’s administration’s raised the stakes of a trade war by listing an additional $200 billion worth of Chinese goods to potentially hit with US tariffs. 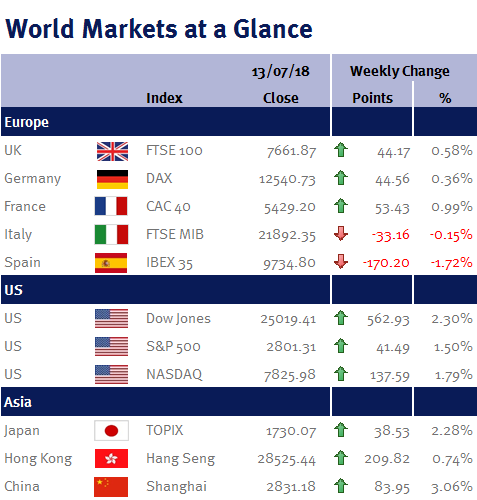 While I continue to believe that this is simply Donald Trump posturing ahead of US mid-term elections in November (tariffs are politically popular – hence why Donald Trump is being aggressive), there is a very real risk that his stance gets out of control. For example, if China starts to find substitutes for its US imports, these new supply chains won’t necessarily get undone when the trade dispute gets resolved (which it will, as a trade war is ultimately not in anybody’s interests). And this would leave US exports (and therefore the US economy) permanently damaged.

Thankfully, equities recovered much of this weakness after China held off from immediately retaliating (suggesting that China wants to ease tensions and negotiate a compromise agreement), coupled with a buoyant US earnings season. Of the 28 companies in the S&P 500 that have reported, 23 have beaten expectations and in aggregate, earnings are 13.33% higher than the same quarter last year.

In the UK, the pound took a hit after Boris Johnson’s resignation put Theresa May’s Brexit compromise (and her political future) in doubt – although what is bad for sterling is good for the FTSE 100, as it boosts returns for exporters and overseas earnings!

The Office for National Statistics in its first publication of rolling monthly growth figures said that the UK economy grew 0.2% in the three months to the end of May – with output gaining 0.3% in May alone. Additionally, a report from Barclaycard showed household spending rose in June at the fastest annual pace in more than a year (no doubt helped by the excellent weather).

This week, in addition to the Helsinki Summit between Donald Trump and Vladimir Putin, the Fed Chair, Jerome Powell, will testify before Congress. Data wise we have UK unemployment data, wage growth, retail sales and CPI; US retail sales and industrial production; Chinese GDP and retail sales; and Japanese CPI.