It has been another week that has seen markets engrossed in US tariff negotiations, with all of the proverbial ‘balls’ being batted back in to the court of Donald Trump. Ironically, in a week that saw the US celebrate Independence Day, many countries have been pushing back on Trump’s negotiating tactics, leaving the US to feel every bit of that Independence. 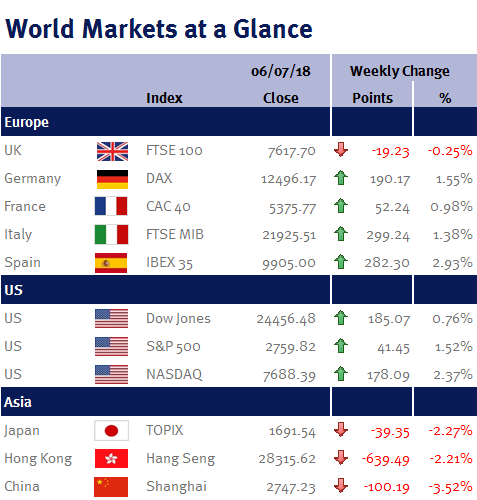 The week began with a large political swing in Mexico that saw leading candidate and extreme leftist Lopez Obrador (AMLO) win the presidential election. AMLO has made it clear that he does not wish Mexico to be taken advantage of and will push back strongly at Donald Trump’s negotiating tactics, both in terms of immigration policy and trade, particularly with the North American Free Trade Act (NAFTA) still on shaky ground. This election result brings NAFTA to the fore in a week that has also seen the third and last member of the trade pact, Canada, impose its own tariffs on US products such as whisky and motorboats. Let us not forget that both Canada and Mexico have the added benefit of being part of the newly formed ‘Transpacific Trade Partnership’, something that the US stepped away from.

Friday saw the U.S. impose tariffs on $34 billion worth of Chinese goods ranging from farming equipment to aircraft parts, with China reluctantly introducing counter tariffs in response. Whilst these tariffs are now tangible, the real impact of 25% tariffs on these goods is likely to be significantly less than the market has priced in, and with the US midterm elections around the corner (November), it seems more likely that this was a move by Trump to garner favour in the lower house. As such, the threat of a further £200 billion of goods facing tariffs seems less likely, as it would affect the US as much as China… in addition, the threat of China’s US debt ownership also overhangs Donald Trump’s threats, leaving the US less likely to push China too far! This comes in a week where the US is also considering backtracking on imposing increased tariffs on European automotive manufacturers, and reducing a current 10% automotive tariff to 0%.

This week was flooded with manufacturing and service PMI’s (a measure of the health of manufacturing/service sectors). We saw UK, Chinese, Indian, European and US data all in expansionary territory with most beating expectation. On Monday, European unemployment data came in lower than expectation at 8.4% and on Friday, US employment, whilst increasing slightly to 4%, is still at a level considered to be around full employment. This suggests that whilst there is much rhetoric around trade disputes, fundamentals remain strong. It must be remembered that the summer period is usually pretty subdued in terms of trade volumes in the market, leaving recent sentiment to introduce plenty of valuation opportunities when investors return to the market and start taking their positions. This was all bolstered by the US Federal Reserve minutes released on Thursday (from their last meeting 12-13 June) reaffirming that they had no concerns over inflation, or indeed a flattening yield curve, and that they would maintain a steady path to rate increases… which rallied the market with an air of much needed confidence.