Global trade continued to influence markets this week, and while there were some positive days, equity markets ultimately closed the week lower.

Markets fell on Monday (25th June) following reports the U.S. was preparing to step up pressure on China, by invoking emergency powers using an obscure 1970s law which would have allowed them to block China from acquiring U.S. technology companies and their intellectual property. 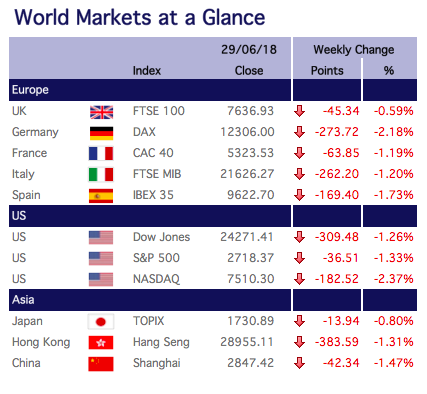 This would have been an escalation from the tit-for-tat tariff exchanges, however, Donald Trump appears to be mindful of the market’s reaction, as he did another policy U-turn, stating that existing legislation was actually more than sufficient to constrain unfair Chinese practices.

Equity markets were relieved by his change of tact, however, his flip flopping is difficult to navigate and Trump appears to be trying to please everyone in the build up to the midterm elections in November.

UK GDP for the first quarter of 2018 was revised up to 0.2% this week increasing the chances of an August rise in U.K. interest rates. The newest member of the MPC (Professor Jonathan Haskel) gave us insight to how he views the U.K. economy this week. Haskel is set to replace hawkish MPC member, Ian McCafferty, in September, and his initial comments suggest he is more dovish, as he suggested there is more slack in the economy and that wage pressures would stay relatively weak.

We begin a new month next week and so most regions will be reporting PMI data. On Sunday presidential elections take place in Mexico, the current front runner, a left wing candidate, has promised to put the poor first and stand up to Donald Trump. On Wednesday the U.S. markets are closed for Independence Day and on Friday the U.S. is scheduled to impose tariffs on $34bn of Chinese goods.