While the media was buzzing as a result of last weekend’s G7 meeting (which ended in turmoil following Donald Trump’s twitter attack on the Canadian Prime Minister, Justin Trudeau) and the summit between Donald Trump and Kim Jong Un (which was unsurprisingly light on any meaningful detail), neither actually impacted financial markets.

Instead, markets were absorbed with a calendar full of important economic data releases, not to mention Brexit negotiations. 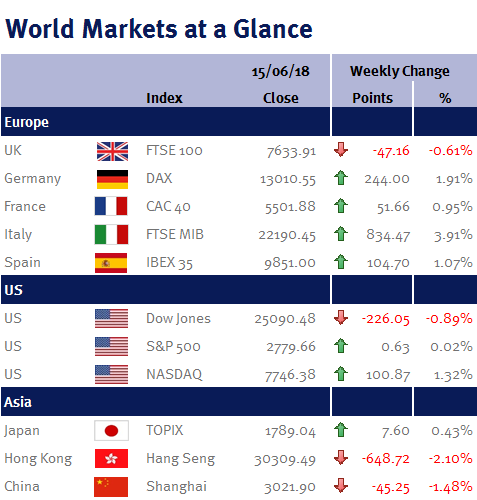 The hotly anticipated US Fed decision came in as expected: interest rates were increased for the second time this year by a quarter-point to a range of 1.75-2.00% from 1.50-1.75%.

However, the accompanying statement was more hawkish than expected as policymakers indicated that interest rates will now increase four times this year (from the previous guidance of three interest rate increases during 2018).

Additionally, the Fed Chairman, Jay Powell, stated that starting from next year, every policy meeting will be followed by a press conference (which makes every monetary policy meeting a ‘live’ meeting – and thus potentially allowing for a faster pace of interest rate increases in 2019).

This resulted in a weakening of the euro (as by Q3 2019, when the ECB starts to consider increasing interest rates for the first time, the Fed could easily have increased US interest rates another four times).

In the UK, industrial production data came in below economist expectations and although the UK economy saw employment hit a record high after adding 146,000 jobs, wage growth slowed from 2.9% to 2.8%, suggesting that the economy still carries spare capacity.

UK CPI inflation came in at 2.4% for May (matching April’s reading) despite the headwind of a large increase in fuel pump prices – which clearly indicates that the impact of the pound’s weakness following the EU Referendum is dissipating quickly.

And as a consequence, unless we see a considerable improvement in UK economic data releases over the coming months, I can’t see myself changing my view: the BoE has no need to increase interest rates this year.

This coming week, the main focus will be the BoE’s monetary policy meeting; Jerome Powell, Mario Draghi and Haruhiko Kuroda (the heads of the Fed, ECB and BoJ) are all due to speak at the ECB’s annual conference in Portugal; and OPEC members meet in Vienna to debate a potential increase oil output.