It is good to see that markets are finally starting to ignore the majority of Donald Trump’s tweets and off-the-cuff comments, appreciating that this is simply part of his negotiating tactics in the ‘new world’ of social media and 24-hour news.

As such, equity markets brushed aside trade-war fears and instead focused on the continuation of the upbeat economic data following last Friday’s (1 June 2018) US employment report. 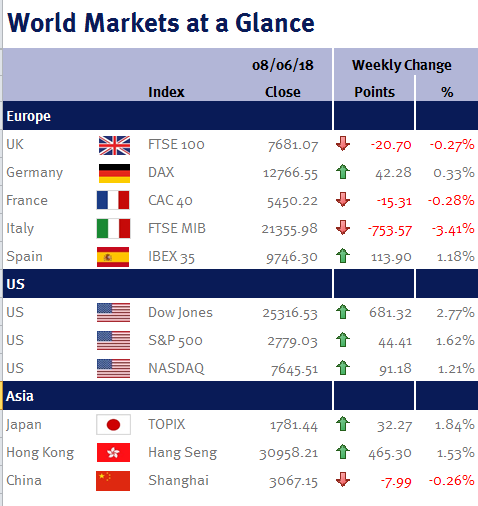 For example, in the UK, PMI data for both construction and services nicely beat economist estimates, while both the BRC and Barclaycard reported that consumer spending grew strongly (although two warm bank holiday weekends, coupled with the Royal Wedding, clearly helped as sales of summer clothes and BBQs jumped).

However attention may well turn back to trade as G7 leaders meet in Quebec today (Friday 8 June 2018) and tomorrow, with the EU and Canada threatening retaliatory measures unless Donald Trump reverses his planned tariffs on steel and aluminium imports.

We also have a busy and eventful week ahead. While the summit between Donald Trump and Kim Jong Un will undoubtedly take centre stage in the media, the world’s three most powerful central banks hold monetary policy meetings.

The Fed is almost certain to increase US interest rates for the second time this year – however, it will be the accompanying statement that will be of main interest to me, as I will be looking for clues to see if policymakers are looking to accelerate the pace of tightening from their original statement of three increases in 2018.

While I expect no change from the ECB meeting, again the accompanying statement will be the main focus after the ECB’s chief economist, Peter Praet, acknowledged this week that the ECB’s meeting will be key for reaching a decision on when to end the ECB’s QE program, given that eurozone inflation is starting to converge with their target (an inflation rate below, but close to, 2% over the medium term).

As I highlighted last week (please see here), while eurozone inflation jumped to 1.9% from 1.2% in April, this was clearly impacted by the higher oil price as the core inflation rate (which excludes volatile items such as food and energy and is seen as a signal of where headline inflation will head) came in at just 1.1%. Additionally, similar to the UK, eurozone Q1 economic data was soft. Consequently, I would speculate that the ECB policymakers may actually want to wait a little longer for evidence that inflation is actually increasing and that the underlying strength in the eurozone economy is strengthening.

In Japan, the BoJ is very unlikely to change course given the continuation of low inflation.

Additionally, the Brexit bill goes to a vote in Parliament.