This has been one dizzying week!

We should have had a positive opening for equity markets given the news over the weekend that the US/North Korea summit was likely to get back on track, coupled with an announcement from Saudi Arabia and Russia that they were discussing increasing their oil output after the oil price hit a four-year high. 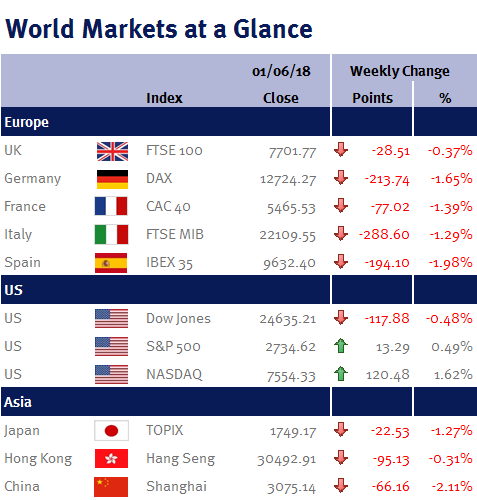 Instead, flashbacks of the eurozone crisis hit markets, as both Italy and Spain (the 3rd and 4th largest economies in the eurozone) lurched toward fresh elections.

Despite news that the US will impose duties on steel and aluminium from the EU, Canada and Mexico, calm was restored and equity markets managed to recover much of their early losses after a last-minute compromise in Italy avoided a snap election (which would have probably been used as a de facto referendum on the euro and EU membership), while in Spain the transition from Mariano Rajoym to Pedro Sánchez ended-up relatively painless as he committed to adhere to the 2018 Budget.

The Fed’s Beige Book showed that the US economy wasn’t showing signs of overheating, as expansion was “moderate” in April and May. Furthermore, annualised US GDP growth of 2.2% in Q1 was slightly lower than previously estimated (2.3%), while US core PCE (the Fed’s preferred inflation measure) slipped to 1.8% from 1.9%. And although today’s (Friday 1 June 2018) US employment data showed payrolls increased by 223,000, April’s data was revised down to 159,000. Average hourly earnings rose 2.7% from a year earlier, while the unemployment rate fell to 3.8%.

Although eurozone inflation jumped to 1.9% from 1.2% in April, this merely highlights the part that the recent jump in oil prices is playing in the higher headline readings across the globe as the eurozone’s core inflation rate (which excludes volatile items such as food and energy and is seen as a signal of where headline inflation will head) came in at just 1.1%.

This coming week we have PMI data from the US, UK, eurozone, China and Japan. We also have eurozone retail sales and Chinese trade and foreign reserves data.