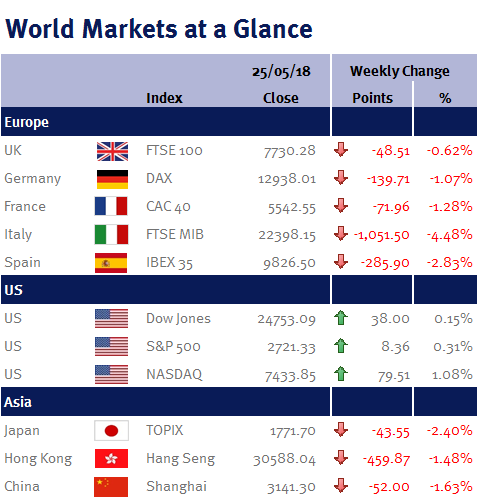 Despite dovish Fed minutes and news that the US and China called a truce on the trade war, caution descended on global equity markets thanks to risks from Italy (two populist parties were granted the go-ahead to form a coalition government); Spain (the main opposition party filed a no-confidence motion against Mariano Rajoy, the Prime Minister); Turkey (President Recep Tayyip Erdogan’s pledged to take control of monetary policy if he wins next month’s election sent the Turkish lira
lower); and North Korea (cancelled summit).

The minutes of the last Fed monetary policy meeting (when they left the benchmark rate unchanged at a range of 1.5% to 1.75%) indicated that most policymakers see the next interest rate increase coming “soon” (so expect an increase at their next meeting on 12-13 June 2018).

However, the minutes also noted that it “could be helpful” if PCE inflation modestly overshoot their 2% target – suggesting that the Fed policymakers aren’t likely to accelerate the pace of rate increases from their previous path of three in 2018.

In the UK, while the CPI inflation reading fell to 2.4% from 2.5% as the effect from the pound’s sharp fall following the Brexit vote falls out of the data, it doesn’t change my view: I still don’t believe that the BoE should increase interest rates this year – especially after both Rightmove and the ONS this week reported weaker London house prices (which will ultimately have a negative impact on consumer confidence and spending), while it was announced today (Friday 25 May 2018) that the second reading of Q1 GDP was unchanged at 0.1%. As I wrote on Friday 11 May 2018 (please see here), Mark Carney, the Governor of the BoE, bizarrely stated that he expected this reading would be revised upwards to 0.3% – and this unfortunately is another example of how the BoE has struggled to read the direction of growth and inflation since the Brexit vote. As an aside, while inflation is likely to continue to fall, the pace of the decline may slow following the recent spike in oil prices.

The highlights of this week coming include: US PCE (the Fed’s preferred inflation measure); US employment data (non-farm payrolls; unemployment rate; the participation rate; and average earnings); China’s trade balance and PMI; and eurozone CPI.