This week’s economic data releases were fairly mixed. I was hoping that April’s US retail sales data would provide evidence that US consumer spending was recovering after a disappointing Q1. Although on the face of it, a 0.3% increase was disappointing and would suggest that Q1’s soft patch was continuing, there were upward revisions to both February (0.8% from 0.6% previously) and March’s (0.0% from -0.1%) readings, so overall the 0.3% reading was reasonably positive. 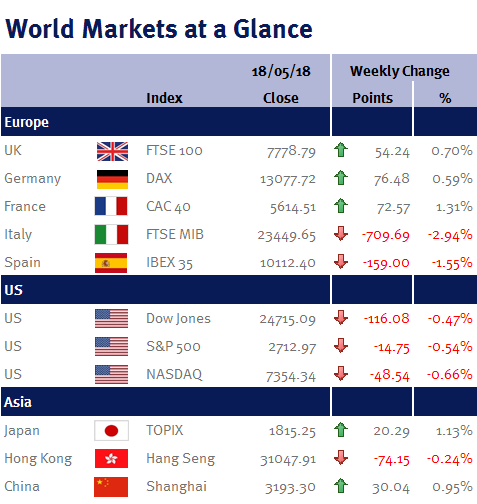 It was the same story in China: industrial output accelerated (from 6% to 7%), while both retail sales and fixed-asset investment growth edged down slightly (to 9.4% & 7.0% from 10.1% & 7.5% respectively). Obviously, looking at the ups and downs in monthly data is often futile, but overall this data suggests that China’s economy may be starting to slow, albeit only slightly, following policymakers’ efforts to rein-in financial leverage.

Japanese GDP data was disappointing: the economy contracted at an annualised rate of 0.6% during Q1, while the previous quarter annualised rate got revised lower (from 1.6% to 0.6%). The breakdown shows that the contraction was due to weak domestic demand. However, this coupled with falling CPI (inflation slowed to 0.7% in April from 1.1% in March), suggests to me that the BoJ is unlikely to exit its QE programme anytime soon!

Eurozone industrial production output expanded 0.5% in March. While this was a reasonable bounce after February’s 0.9% decline, it was less than the 0.7% consensus forecast – suggesting that Q1’s soft patch could potentially carry-over into Q2.

Elsewhere, oil continued to move higher on speculation of supply disruptions in Venezuela and Iran, despite the fact that the IEA (International Energy Agency) cut its 2018 forecast for global oil demand believing that the current high prices will put a brake on consumption. Additionally, the noises from the EU and China suggest that they are unlikely to follow the US in re-imposing sanctions on Iran, which would suggest that the impact on Iranian exports may actually be limited.

We have another busy week ahead, with the Fed’s monetary policy minutes the main focus. Also from the US we have PMI data; jobless claims; home sales; and the University of Michigan Consumer Sentiment. Furthermore, we have a number of Fed policy-makers speaking this week.

In the UK we have CPI, PPI, retail sales; the second estimate of Q1 GDP; and a couple of house price indices/surveys, while from Europe, we have ECB minutes; eurozone PMI and consumer confidence.