Brent crude oil hit $77 a barrel this week for the first time since November 2014 after Donald Trump pulled out of the Iran nuclear deal and said that the US will re-impose all the sanctions waived under the 2015 agreement – which is likely to disrupt crude exports from OPEC’s third-largest producer. 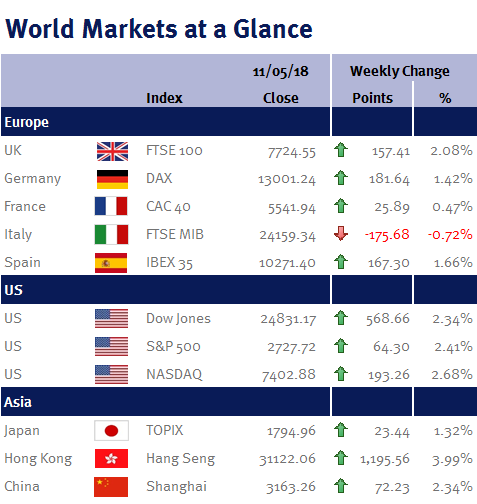 While Saudi Arabia has indicated that it could boost output to mitigate any supply shortages caused by the sanctions, I am not convinced as a higher oil price is clearly in their interests as it will help support their privatisation plans for Aramco (Saudi’s state-owned oil production company), while the Saudi Energy Minister, Khaled al-Faleh, said last month that the global consumers had the capacity to absorb higher oil prices!

Admittedly, global demand does seem remarkably robust despite the fact that the oil price is now over 50% higher than it was this time last year, but I believe it would be wrong of Saudi Arabia to see these higher prices as anything other than a short-term bonanza, as it is likely to ultimately result in higher shale production and increased investment to help reduce energy intensity.

A rising oil price is also inflationary (a higher oil price doesn’t simply mean higher petrol pump prices, it will affect the price of many other goods and services) which could (wrongly) persuade central banks to tighten monetary policy. In fact, yesterday (Thursday 10 May 2018) data from the US showed that headline US CPI inflation continued to move higher (increasing to 2.5% from 2.4% in March), while the core reading, which excludes volatile items such as food and energy, was unchanged at 2.1%.

As expected, given the recent poor UK economic data, the BoE decided to leave UK interest rates unchanged during yesterday’s (Thursday 10 May 2018) monetary policy meeting. However, despite the fact that the BoE’s quarterly inflation report included a downward revision to 2018’s GDP forecast and a lower inflation outlook, two policymakers (Ian McCafferty and Michael Saunders) voted for higher interest rates, while Mark Carney, the BoE Governor, signalled during his accompanying press conference that tightening was on the way!

Interestingly, Mark Carney was dubious about the recent 0.1% GDP growth figure, believing that the weather (‘the Beast from the East’) heavily distorted the outcome and as a result, expects it to be revised up to around 0.3% – hence why the BoE believes that the UK economy will still expand by 1.4% this year (albeit down from their February forecast of 1.8%). I find this very strange given that most of the Q2 data we have seen so far (please see below) has also been disappointing. Furthermore, the Office of National Statistics (ONS) stated that Q1’s weather had only a limited impact on Q1’s disappointing GDP data.

This week’s disappointing UK data included: the British Retail Consortium (BRC) reported that same-store sales were 4.2% lower than they were last year and that total sales were 3.1% lower; the Halifax reported that house prices dropped 3.1% in April (the biggest monthly drop in almost eight years); the Royal Institution of Chartered Surveyors’ (RICS) house price balance fell to -8 in April; and UK industrial production only grew by 0.1% in March, while UK manufacturing output declined 0.1%.

I still currently believe any increase in UK interest rates this year would be a policy error. While I appreciate that UK CPI inflation is easing (as the impact from the weaker pound immediately following the Brexit vote starts to fall out of the data), it does not immediately mean that the worse is over for UK households. Real incomes are barely rising and this coupled with auto-enrolment (which means that many employees will need to make higher pension contributions) and a weaker housing market will all act as a drag on UK economic growth, given that the consumer accounts for around 60% of the UK economy. Additionally, Brexit uncertainty is suppressing business investment – hence my view that the chances of the UK economy falling into recession is now more likely than not.