Between the US PCE data (the Fed’s preferred inflation measure) on Monday (30 April 2018); the Fed’s monetary policy meeting on Wednesday (2 May 2018); and today’s (4 May 2018) US employment data, I was looking for clues on the future pace of US interest rates increases (while the Fed has previously indicated that it would increase three times in total this year, speculation of a 4th increase this year has put the market on edge). 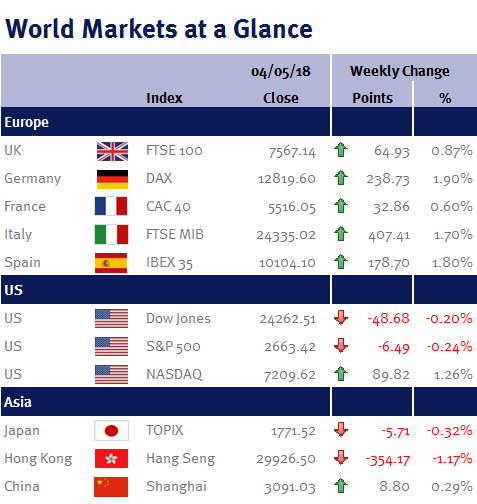 Although the data was muddled, my view hasn’t changed: three increases this year (i.e. 2 more).

While the headline PCE rate increased from 1.8% to 2% and the core rate hit 1.9% (up from 1.6%), the Fed left US interest rates unchanged. Despite the fact the Fed’s statement acknowledged that inflation was close to their 2% target, they also used the term “symmetric” in relation to their target – which would suggest that they are likely to tolerate an inflation rate slightly above 2%.

As an aside, Sprint and T-Mobile this week announced plans to merge. This enlarged company should be big enough to challenge the market leaders (Verizon and AT&T) and could suppress mobile-phone pricing further over the coming years – and declines in ‘cellular’ pricing have been quoted numerous times by the Fed over the past year or so as a reason for the continued undershoot in US inflation.

Thankfully, today’s US employment report confirmed that March’s very weak results were not a sign of a downturn. Admittedly, the payroll gain of 164,000 in April was softer than the 193,000 economist had expected, but March’s weak initial report was revised up by 22,000 to 135,000, while the unemployment rate fell 3.9%. However, both wage growth and labour force participation declined: the participation rate eased to 62.8% from 62.9%; while earnings only grew by 2.6% (unchanged on March’s revised down growth rate).

This suggests to me that slack still remains in the employment market and as a result, the NAIRU (non-accelerating inflation rate of unemployment) is probably a lot lower than the Fed thinks.

The ECB’s main economic releases this week were CPI inflation and GDP: headline CPI and core CPI came in much weaker than economist estimates with a 1.2% and 0.7% reading respectively; and Q1 eurozone GDP growth slowed to 0.4% (from 0.6% in Q4 2017 and the slowest quarterly gain since Q3 2016). Both data releases reaffirm my previously stated view that we are unlikely to see tighter monetary policy in Europe any time soon.

Elsewhere, despite a large inventory gain, the price of Brent crude oil rose over the week due to uncertainty over Iran’s nuclear deal. Donald Trump has said that he will pull the US out of the accord and re-impose sanctions on Iran (and thus potentially restrict Iran’s ability to sell its oil) if the deal can’t be fixed. Although the French President, Emmanuel Macron has said he will work to preserve it, the Iranian President, Hassan Rouhani said the deal was not negotiable!

This week coming we have US & Chinese PPI & CPI data; while in the UK we have a BoE monetary policy meeting alongside an inflation report and press conference.