This week, the US 10 year treasury yield traded (albeit briefly) above 3% for the first time since 8 January 2014. While the media loves a round number to use in its headlines, this is not a sea change and as such, there is no need to panic. In fact, the reasons have been in place for some time: both US growth and inflation projections have been steadily increasing (hence all the talk of potentially four US interest rate increases this year). Admittedly, the recent increase in commodities (thanks to trade war talk and geopolitical uncertainty) has also helped push yields higher. 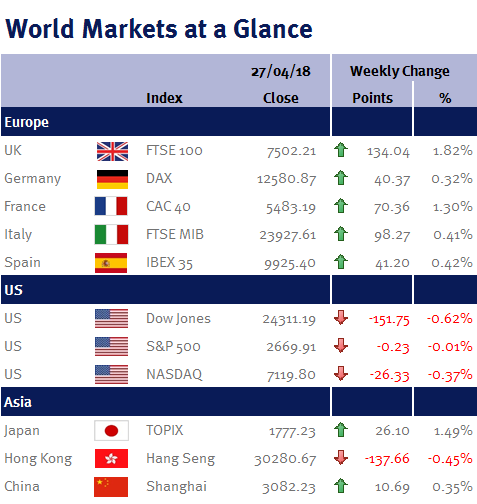 I would also like to stress that breaching the 3% level doesn’t automatically pave the way to significantly higher yields. While the US may have inflation above the Fed’s 2% target over the coming months, it will be predominately due to dollar weakness (which increases the cost of their imported goods), coupled with higher commodity prices (speculation that Donald Trump will pull out of the Iran nuclear deal has helped Brent crude oil rise to nearly $75 a barrel, while sanctions against Russia has increased the costs of some metals).

While I appreciate that low inflation and the Fed’s bond-buying program (QE) since the financial crisis has helped keep bond yields low (and in turn helped equity markets move higher), a 3% bond yield and slightly higher inflation doesn’t all of a sudden make equities unappealing: equity valuations are being supported by accelerating corporate earnings growth thanks to Donald Trump’s tax reforms.

In fact, with just over half of the S&P 500 index constituents having reported (266 companies), not only are Q1 reported earnings currently running 24.96% higher than the same quarter a year ago, but so far 207 companies have reported earnings above estimates. In aggregate, companies have reported earnings 6.96% above expectations – which suggests to me that this bull market still has plenty of life in it. Furthermore, today’s (Friday 27 April 2018) US GDP data showed that the US economy grew by 2.3% in Q1 thanks to business investment and exporters. Although this was down from 2.9% in Q4 2017, market consensus was for growth of just 2%.

Elsewhere, as expected, the ECB kept interest rates unchanged yesterday (Thursday 26 April 2018). Although Mario Draghi characterised the recent soft economic data from the eurozone as a “moderation” due to “temporary factors”, he stated that ECB discussions regarding the end of QE have been pushed back to July at the earliest – which implies to me that the ECB is having doubts that CPI inflation will actually converge with their 2% target without continuing stimulus.

Regular readers of my commentaries will know that I had serious misgivings regarding last November’s UK interest rate increase, believing that as a result, the chances of the UK economy falling into recession is now more likely than not. Unfortunately, today (Friday 27 April 2018) it was announced that the UK economy grew by just 0.1% in Q1 2018 – not only is this the worst quarterly performance since Q4 2012, it is significantly lower than the BoE’s growth forecast of 0.4% made in February (when they also stated that interest rates may need to rise “somewhat earlier and by a somewhat greater degree”’ than previously anticipated).

Admittedly, bad weather (‘the Beast from the East’) would have had a negative impact, but this miss wasn’t a surprise to me given the squeeze on UK household income (the consumer accounts for around 60% of the UK economy), coupled with the recent disappointing UK economic data and Brexit uncertainty.

While this reading immediately reduced talk of an interest rate increase at the next month’s BoE monetary policy meeting, surprisingly, economists are still expecting the BoE to increase UK interest rates in August! I still currently believe any increase in UK interest rates this year would be a policy error.