Global equity markets rose this week as concerns over geopolitics subsided due to no reprisal from Russia for the missile strikes on Syrian military bases by the US, UK and France last weekend. Russia and the US do appear to want to improve relations and avoid escalations, as both nations reportedly cancelled additional trade sanctions earlier this week. 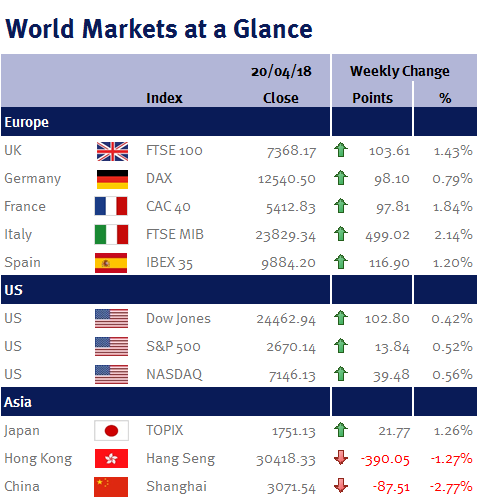 UK inflation data out this week casted doubt on the next step for the Bank of England; data from the ONS released on Wednesday showed UK CPI inflation slowed to 2.5% over the past twelve months, the lowest level this year and lower than forecasts. Until now, May’s MPC meeting was widely anticipated to result in a 0.25% increase in the base rate.

Casting further doubt on the outlook for UK interest rates was more data from the ONS on Thursday, showing retail sales fell 0.5% in March as poor weather deterred shoppers and weighed heavily on the high street (adding to the gloom, Debenhams issued a profits warning on Thursday). Mark Carney, the governor of the Bank of England, highlighted the recent mixed data this week and said he didn’t want to be “too focused on the precise timing” of an interest rate hike.

The consumer plays an important role in the UK economy as household consumption accounts for more than 60% of UK GDP. The MPC therefore faces a dilemma; if they raise rates too soon or too fast they risk derailing an already fragile UK economy, which is already facing uncertainty owing to the ongoing EU exit negations. There was however, a glimmer of hope for consumers this week as UK average weekly earnings reportedly rose on average 2.8% in the three months prior to February, and so if inflation and wages remain at current levels, pressure on consumers could subside.

US earnings season is well underway and next week sees a lot of companies updating investors, of particular interest will be reports from US technology companies which have been the cause of a lot of market volatility lately. Also closely watched next week will be European Central Bank monetary policy announcements and first quarter GDP releases in the UK and US.