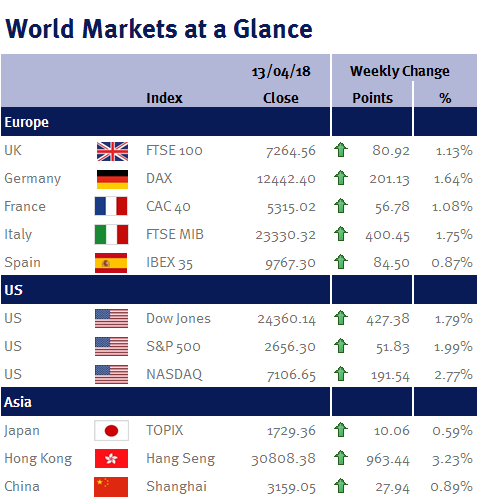 Xi Jinping promised to ease access in a “new phase of opening up” and to protect US intellectual property, while Donald Trump expressed optimism that the US could avoid a trade war with China. He also asked his economic advisers to look at re-joining the Trans-Pacific Partnership (TPP) free-trade deal he pulled out of shortly after taking office – which would further ease the risk of a trade war developing.

As I have commented previously (please see here), I believe concerns of an outright trade war have been overblown as Donald Trump’s call for tariffs have to me looked more like bargaining chips – and if he can get China to open their markets by lowering tariffs on items such as cars and financial services, in order to avoid the proposed US tariffs on their exports to the US before they are implemented, then the recent equity market weakness could quickly be reversed.

In fact, equity markets probably would have ended the week even higher had we not had to endure heightened geopolitical worries, thanks to the threat of retaliations for the alleged Syrian chemical weapons attack, coupled with the new US sanctions on seven Russian oligarchs and 17 senior government officials with close ties to President Vladimir Putin to punish Russia for interfering in the 2016 election.

These geopolitical concerns helped lift Brent crude oil to over $72 a barrel – its highest level since June 2015, despite record-breaking US output and data showing an increase in inventories.

Elsewhere, minutes from the most recent US Fed meeting (held on 21 March 2018), when they increased interest rates by 25 basis points, showed that officials are leaning towards a slightly faster pace of interest rate increases as they are growing more confident in hitting their 2% inflation target (the Fed has previously indicated that they would only increase interest rates 3 times this year).

However, Robert Kaplan, the Dallas Fed President, this week reiterated his expectation that the Fed will only increase interest rates two more times in 2018, while the Minneapolis Fed President, Neel Kashkari, said that the US still has some slack in the labour market!

In the UK, despite the announcement that UK manufacturing declined 0.2% in February (and given it was flat in January, UK GDP may come in lower than the 0.3% currently predicted by the BoE), Ian McCafferty, a BoE policy maker, said the central bank “shouldn’t dally” in increasing interest rates believing inflation could run hotter than expected.

Consequently, all eyes will be on Tuesday’s (17 April 2018) average earnings data and Wednesday’s (18 April 2018) CPI inflation data. Any acceleration could increase bets on an increase in UK interest rates in May and expectations of a faster pace of tightening in 2018/19. I had misgivings with November’s UK interest rate increase and believe that any further UK monetary tightening increases the chances that the UK economy will fall into recession.

Also next week we have UK and US retail sales and eurozone CPI.