It was a quiet week in terms of economic data and company announcements, however, global trade and the technology sector continued to dominate headlines resulting in a volatile week. 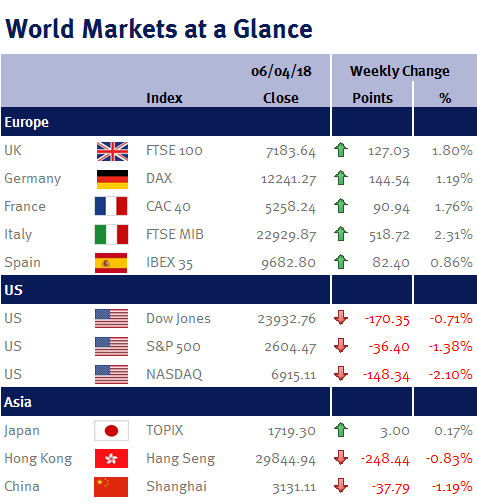 Most markets were closed on Monday for the Easter holidays, with the exception of the US where technology companies had another tough day as Donald Trump accused Amazon of not paying state and local government taxes. He also said Amazon is putting many thousands of retailers out of business and that the US Post Office loses $1.50 for every package it delivers on its behalf. Intel also had its worst day in two years, after Apple was said to be planning to cease using Intel processors from 2020. It has been a tough couple of weeks for the large technology companies as they seem to have been the focus of governments and regulators and it follows revelations of misuse of data at Facebook.

Global trade continued to weigh on market sentiment as on Tuesday, the US released details of the 1,333 Chinese goods on which it proposes to levy punitive tariffs. China was quick to respond by saying it would charge 25% tariffs on an additional 106 American goods including politically sensitive soybean exports and some Boeing aircraft. Towards the end of the week, Trump asked his staff to consider tariffs on $100bn of goods, following China saying they will fight to the end.

I am still of the opinion that we are not facing a full blown trade war and recent rhetoric is to address what Donald Trump sees as unfair conditions placed on US companies operating in China and ultimately protect US intellectual property. This sentiment was supported last week as Donald Trump’s chief economic adviser, Larry Kudlow, stressed that this was not a trade war and they were merely trying to protect US businesses. He also highlighted that no new duties have been implemented, and talks with the Chinese will continue for several months before anything is done.

Data released on Friday showed an additional 103k jobs were created in the US in March, which was below expectations with the weather cited as partly to blame for the slowing; this follows an exceptionally strong February which was revised up even further on Friday to 326k. There was a slight pickup in wage growth which has been notably lacking in the recent recovery. Should wage growth be sustained, it would help support the consumer and keep the Federal Reserve on track for further interest rate increases this year.

Next week, Facebook CEO Mark Zuckerberg will testify to Congress following recent revelations of misuse of its users’ data by third parties. The Federal Open Market Committee will release minutes of its March meeting, at which they raised their target interest rate 0.25% and on Wednesday, the US will release inflation data for March.