Markets did well to close higher this week after initial optimism that a global trade war may be averted was somewhat overshadowed by share price declines in the technology sector. Over the weekend, the US Treasury Secretary Steve Mnuchin indicated talks were progressing between the US and China which resulted in Monday being the best day for the S&P 500 since August 2015. 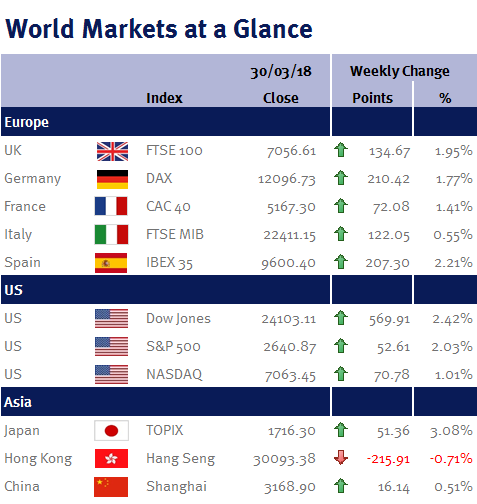 There are mixed messages coming from the US with Donald Trump seemingly taking a hard stance on trade whilst Washington has already agreed to concessions with some countries on certain goods. In addition to balancing trade and placing ‘America First’, Donald Trump wants to avert China indirectly acquiring US intellectual property and technology via acquisition of American companies (China can force foreign companies share technology with domestic businesses). However, it does appear that China is willing and wants to avoid a trade war as this week it said it would open-up its markets to competition from overseas and overhaul the law governing intellectual property rights in the country. China also said it would start to permit foreign firms buying stakes in local businesses and possibly lower the country’s tariffs on US-made cars.

Technology shares had a tough week, Facebook has been at the centre of media attention recently following claims some of its data held by a third party (Cambridge Analytica) may have been misused. Technology shares have had a stellar start to the year and a potential crackdown by authorities on how these companies use personal data did not go down well with investors.

In terms of data this week, the final estimate of US GDP for the fourth quarter of 2017 was 0.4% better than previously estimated at 2.9%, helped by a large gain in consumer spending. US PCE inflation (The Feds preferred measure) was reported at 1.8% for February. Fed chairman Jerome Powell said at a press conference last week inflation should move closer to 2% (The Feds target) and stabilise around that level for the medium term.

There was an unusual amount of merger and acquisitions news in the FTSE100 this week: Smurfit Kappa rejected an improved offer from its US rival International Paper; Japan’s largest pharmaceutical company, Takeda, announced it was in the preliminary and exploratory stages of preparing a bid for UK pharmaceutical company Shire; and Melrose Industries won shareholder approval for its hostile bid for engineering firm GKN, despite management objections.

Most markets were closed on Friday for Easter, whilst the US re-opens on Monday, most other markets remain closed. Next week is the end of the UK tax year and there is plenty of PMI and ISM data to start the month, giving some insight to US manufacturing and UK services. US employment data for March is also released which will be closely watched after February saw a bumper 313k jobs created.