It has been a horrible week for global equity markets. The sell-off in technology sector at the start of the week (due to concerns about privacy protection – Facebook shares ended the week 14% lower) picked up pace after Donald Trump announced tariffs of around $50bn on China. 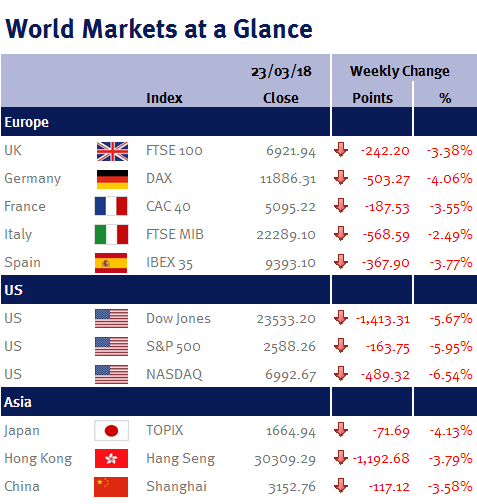 Although Chinese authorities announced plans for reciprocal tariffs on $3bn of US imports, this measured response suggests to me that they are open to negotiating with the US government and that a full blown trade war is unlikely.

Consequently, I still believe that there will be no meaningful impact on this year’s global economic growth.

In fact, a JPMorgan economist based in Hong Kong has estimated that the affected Chinese exports only accounts for 2.2% of China’s total exports and that the additional tariff is equivalent to just 0.1% of China’s GDP. Furthermore, if the US does follow through and imposes a 25% tariff on the $50bn of imported goods, the additional $12.5bn cost is the equivalent to just a 2.9% charge if it was spread across all of China’s exports to the US.

As a result, I am of the opinion that this is looking more like a trade skirmish than a full blown trade war – and as such, I believe that equity markets have over-reacted: the fundamentals for equity markets remain strong, while US equities will also benefit from Donald Trump’s massive and transformational tax cuts.

Elsewhere, as expected the Fed increased US interest rates on Wednesday (21 March 2018) to a range of 1.5-1.75% from 1.25-1.5%. However, it was the Fed’s ‘dot plot’ that got most of the attention: there was no shift from the previous guidance of three interest rate increases during 2018.

Yesterday (Thursday 22 March 2018), the BoE voted 7-2 to leave interest rates unchanged at 0.5% – although policymakers are widely expected to increase interest rates later this year (potentially as soon as May), after UK CPI inflation eased to 2.7% in February from 3% in January as the Brexit impact and the subsequent exchange rate pass-through starts to fall out. The core rate (which excludes volatile energy, food alcohol and tobacco costs) fell to 2.4% from 2.7%. This slowdown coupled with wage data (wages rose by 2.6% – their fastest pace since the end of 2016), puts a return to real wage growth in sight and will hopefully provide some relief to households, who have seen their spending power squeezed over the past year or so.

It is a quiet week ahead as the big data releases of the month are mostly out of the way, although we do have US PCE (the Fed’s preferred inflation gauge) and the final US and UK Q4 GDP readings.

However, central bankers have another busy week with a number of key speeches including New York’s William Dudley and Cleveland’s Loretta Mester on Monday (26 March 2018); followed by Atlanta’s Raphael Bostic and Philadelphia’s Patrick Harker later in the week.