Global equity markets were rattled this week following the news that Donald Trump was replacing Rex Tillerson, with Mike Pompeo as his Secretary of State (Mike Pompeo is a trade hardliner and is seen as more confrontational than diplomatic – increasing the risk that we may see a ramp up in trade tensions). 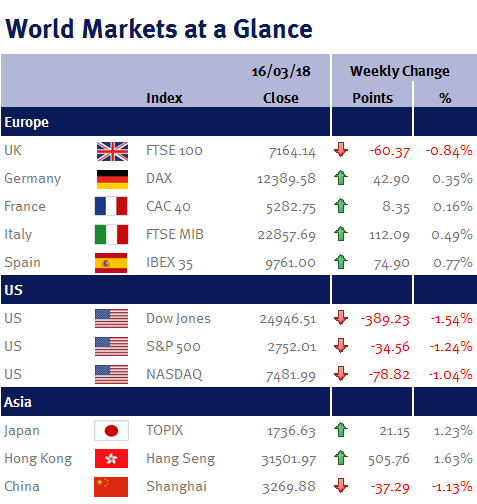 Interestingly, the Dow Jones is already clearly feeling the effects of Donald Trump’s import tariffs on steel and aluminium. Boeing has fallen heavily as it has a lot at stake from a trade war given it is a big user of imported steel and aluminium. Boeing is the Dow’s largest stock, accounting for nearly 10% (the Dow is a weird index as it doesn’t represent its constituent companies’ market capitalisation, but instead uses the share price of each constituent company – and Boeing’s share price peaked at $364.64 on 27 February, but has since fallen to $330.47). Yet in the S&P 500 (which, like the FTSE-100, is based on the market capitalisation), Boeing is only the 24th largest stock with a weight of just 0.78% – and as a result, the Dow has underperformed the S&P500 by nearly 2% so far this month.

US CPI inflation was in-line with expectations at 2.2%, while the core reading (which excludes food and energy) was 1.8%. However, the US retail sales data reading was a tad disappointing, with sales excluding autos and gasoline up 0.3% in February, after a 0.1% decline during the weather impacted January – so although tax cuts and a strong employment market are boosting sentiment, this isn’t being translated into consumer spending (and consumer spending, is the biggest part of the US economy).

This reinforces our Goldilocks view (reasonable global economic growth and lacklustre inflation) and although the US may see some inflationary pressures from the steel tariffs and a potential increase in government spending, I don’t believe that the Fed will accelerate its planned pace of monetary tightening and therefore will do no more than 3 quarter-point interest rates increases this year (making Morgan Stanley’s 5 increases this year look very wide of the mark).

In fact, we will hopefully get an indication this coming week, as Jerome Powell has his first meeting as Fed chair. Although the meeting is highly likely to result in a quarter-point rise in interest rates, all eyes will be on the Fed’s ‘dot plot’ (and mentioned above, I am not expecting this to change) and the language of the accompanying statement.

In the UK, in addition to inflation and unemployment data, the BoE also meets this week – while I expect policymakers to keep interest rates unchanged, as with the Fed meeting, all the attention will be on the tone of the accompany statement.

Elsewhere, on Sunday (18 March 2018) Russia goes to the polls, with Vladimir Putin almost certain to be re-elected president.