It’s been a pretty good week for equity markets. After last week’s risk-off sentiment following Donald Trump’s import tariffs on steel and aluminium, sentiment swung back to positive on speculation that it won’t spark a trade war as Donald Trump softened his stance (imports from Canada and Mexico are now excluded, while US allies will also be able to apply for exemptions).

Even the resignation of Donald Trump’s chief economic advisor, Gary Cohn (a Democrat), on Tuesday (6 March 2018) in protest to the tariffs failed to significantly panic equity markets; which instead focused on the marked reduction in tensions with North Korea, after Kim Jong-un indicated that he was willing to discuss denuclearisation with the US. 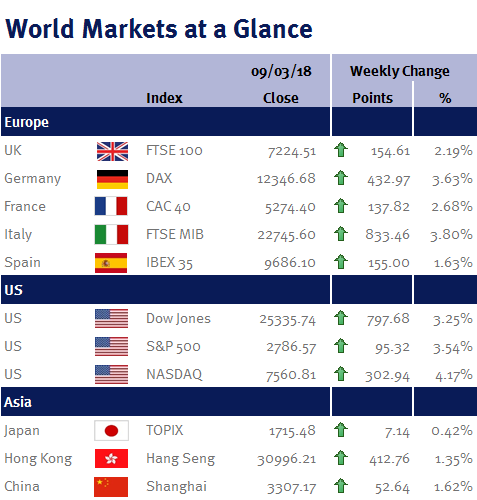 Yesterday (Thursday 8 March 2018) the ECB President, Mario Draghi unexpectedly dropped his pledge to expand the ECB’s monthly bond purchases (QE) if needed. However, while acknowledging the eurozone’s strong economic growth, he said “victory cannot be declared yet” due to subdued inflation. And although he didn’t give any clarity as to when QE will end or when interest rates may start to increase, the tone of his statement didn’t suggest that the eurozone was heading for a higher interest rate environment any time soon.

This employment data was very positive: it doesn’t look like the US economy is yet at full employment, while the wage gains that unsettled equity markets last month clearly haven’t taken hold.

Consequently, it appears to me that the goldilocks environment (reasonable economic growth and lacklustre inflation) is still alive and well – and more importantly, it should ease any concerns the market had that there may be four US interest rate increases this year.

This coming week we have Philip Hammond’s first ever Spring Statement; US CPI, PPI and retail sales; and eurozone CPI.