Despite starting the week on a firmer note, all the major equity markets ended the week in the red after Donald Trump’s imposed import tariffs on steel and aluminium. 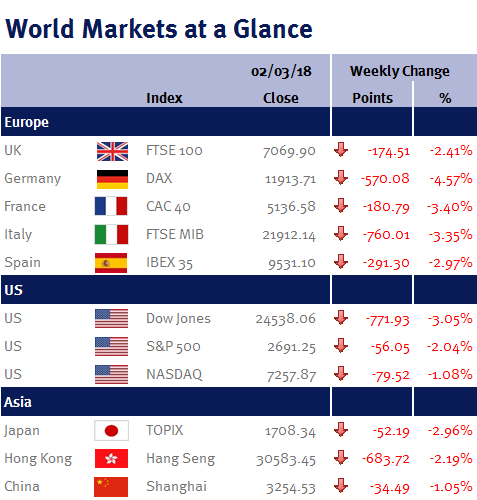 While I don’t want to sound blasé, I think the market has probably over-reacted: the tariffs include Canada and Mexico (despite the NAFTA agreement) and the announcement came just as Lui He (reported to be the Chinese President’s most trusted economic adviser) arrived in Washington to meet Donald Trump’s senior economic team – so it is very possible that it is simply part of Donald Trump’s negotiating tactics and some sort of compromise will be agreed. Furthermore, the likely damage to the global economy from these metal tariffs will not be significant. Obviously, there is a risk that it will escalate with retaliation, but a full-blown trade war is not in anybody’s interests and of course, tariffs are effectively a tax, which could impact US inflation (and therefore US interest rates), as those US companies using these two metals may pass-on the tariff costs to the end user rather than absorbing them.

Even though markets ended the week heavily down, it wasn’t all doom and gloom. Jay Powell made his first appearance as Fed chairman on Tuesday (27 February 2018) and Thursday (1 March 2018) and emphasised continuity as he signalled that the Fed is likely to continue with its gradual interest rate increases. He also made it clear that he doesn’t see any signs of the US economy overheating – in fact, it was announced separately that the US economy expanded at a 2.5% annualised pace in Q4 2017 – below the initial GDP estimate of 2.6%.

While he has previously stated that the market is too fixated on the precise timing of policy moves, he hinted that a March increase was a near-certainty. In view of February’s indiscriminate equity market sell-off (which was based on a return to high inflation and more aggressive monetary tightening), his testimony was very reassuring.

Refreshingly, on inflation, Jay Powell acknowledged (unlike his predecessor, Janet Yellen) that inflation has been low due to persistent factors including technology (the Amazon effect) and globalisation, rather than just one-time transitory factors. And yesterday (Thursday 1 March 2018) the Fed’s preferred inflation gauge, the PCE, was released: PCE for January was unchanged at 1.7%, while the core rate was 1.5% (also unchanged). This compares to 2.0% and 1.9% respectively for January 2017.

Elsewhere, Mario Draghi, the ECB President, was also dovish during his testimony at the EU Parliament, stating that while the eurozone was expanding, inflation has yet to show any sustained upward trend and as a result, the eurozone’s inflation path was still conditional on ECB stimulus.

This Sunday (4 March 2018) is a big day for European politics as Italy goes to the polls, while in Germany, the Social Democrats vote to approve a renewed coalition with Angela Merkel’s CDU.

Elsewhere, next week we have the Fed’s Beige Book; US employment data (non-farm payrolls; unemployment rate; the participation rate; and average earnings); and an ECB monetary policy meeting.