There was further insight into the thoughts of the UK and US Central Banks this week; however, the direction of equity markets was largely influenced by many companies announcing their 2017 earnings.

The minutes of the January FOMC meeting released on Wednesday paved the way for Jerome Powell’s first FOMC meeting as Federal Reserve Chair to result in raising the US interest rates. Minutes showed that Federal Reserve members are becoming more confident in their economic outlook, which coupled with expectations of continuing strength in the labour market, leads them to be optimistic about hitting their inflation target. 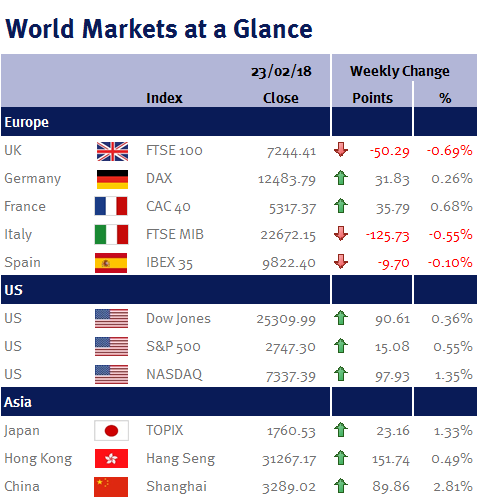 In the UK this week, Mark Carney, Governor of the Bank of England gave testimony on the inflation report and whilst he is unable to commit to a likely path of future interest rates, his choice of words does help to influence investor expectations. Ultimately, future economic data will determine interest rates and the act of raising interest rates will impact future data; so investors and central bankers need to remain vigilant and respond to data as and when it is released. Unemployment data this week didn’t help the case for raising UK rates, as it unexpectedly rose for the first time in nearly two years, rising from 4.3% to 4.4% between October and December. Average weekly earnings on the other hand, came in 0.1% above expectations at 2.5% and whilst still lagging the rate of inflation (CPI 3.0%), the gap is narrowing. Productivity in the UK was also reported this week to have been the best since the 08/09 recession.

Next week, 2017 corporate earnings releases continue, the new Fed Chairman, Jerome Powell, will deliver his first semi-annual testimony on the US economy and monetary policy on Tuesday and Theresa May will give a speech outlining her Brexit strategy on Friday.