Global equity markets had a strong week, the S&P 500 posted its largest weekly gain in over five years, helping to recover some of the lost ground over the past couple of weeks. The focus this week has been on inflation and retail sales data which helped investors assess the likely future path of central bank interest rates. 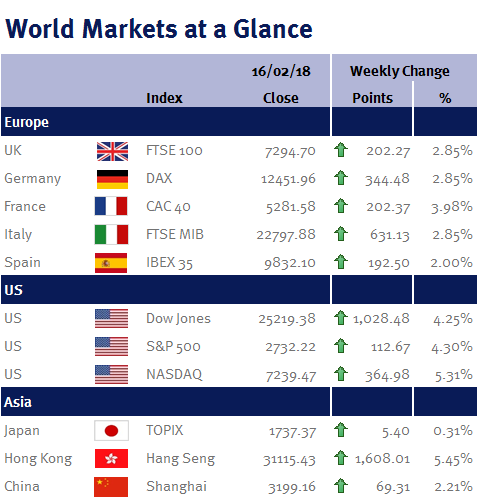 Headline inflation in the US was reported at 2.1% in January, ahead of expectations and up from 1.9% in December. Core inflation (which excludes energy and food costs) was forecast to fall from 1.8% to 1.7% but remained unchanged.

The recent sell off in equity markets was triggered by improving wage data in the US, which led investors to speculate that the US would raise interest rates much more aggressively than previously communicated. Although this week’s inflation data was ahead of expectations, it is not sufficiently elevated to imply that the Fed will raise rates more aggressively than planned and weaker than expected January retail sales data released this week helped temper expectations.

UK inflation data was also released this week; CPI was reported at 3.0% which is close to its five year high and above forecasts. The UK is in a unique position when compared to the rest of the world as inflation is a direct result of BREXIT related currency moves rather than anything more traditional or substantial.

UK retail sales data for January was released today (16/02/2018) and came in weaker than expected, highlighting the dilemma facing the Bank of England. With inflation at or above the target range, it is logical to expect an increase in interest rates, but as UK inflation is a result of currency weakness and not consumer demand, to rise aggressively would strangle the biggest component of the economy (the consumer). This reinforces Ian’s comments last week (please see here) and would likely be a policy error and the least likely path.

Next week, the Fed releases the minutes of its January FOMC meeting and the Governor of the Bank of England will testify to the Treasury on the UK inflation report. Also announced next week are UK wage and employment data and the second estimate of fourth quarter 2017 UK GDP.