It has been a bit of a wild week for equity markets to say the least, with most ending the week down in excess of 5%.

US equity markets fell over 4% on Monday following last Friday’s (2 February 2018) employment data – and this rout then spread globally. Further US weakness yesterday (Thursday 8 February 2018) not only took US markets back to the levels they were last November, but it also means that the S&P 500 is now officially in a ‘correction’ period as the S&P 500 closed just over 10% lower than its high on 26 January 2018, which is the threshold used to differentiate market corrections from market dips. 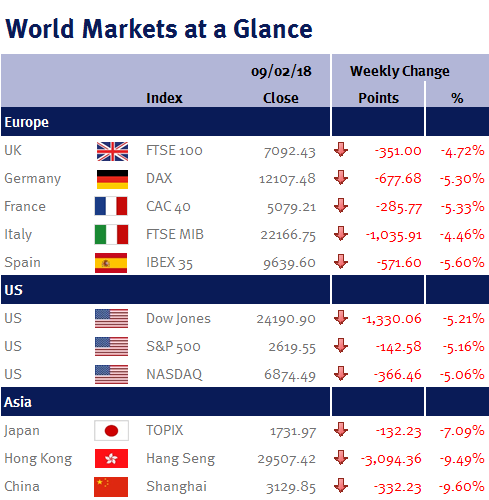 However, it is important not to overact. If we take a few steps back to reflect: as I wrote in last week’s Market Summary (please see here), US average hourly wage growth strengthened to 2.9% year-on-year (the largest increase since June 2009) – and this was interpreted as a signal that inflation will accelerate and thus force the Fed to tighten monetary policy quicker than previously indicated and sparked the equity market sell-off.

Nevertheless, I also indicated that the same unemployment report showed that workers were employed for fewer hours (34.3 down from 34.5). As a result, aggregate income was a lot softer that the 2.9% wage growth would suggest – and that will keep a lid on inflation.

Moreover, the cold weather would have negatively impacted the number of hours worked and accordingly would have slightly inflated the average hourly earnings.

Consequently, while interest rates will undoubtedly rise from prevailing low levels, I can’t see the Fed doing much more than what they have already indicated, as there is currently little sign of significantly faster inflation to justify changing the Fed’s stated trajectory of three increases this year.

Furthermore, the other fundamental drivers of the equity market remain intact: synchronized global growth coupled with strong corporate earnings growth and large share buybacks (both as a result of the US tax reforms).

Additionally, given the steepness of Monday’s (5 February 2018) decline (in a 7 minute period about an hour before the close, the Dow Jones fell 860 points or 3.5%) and yesterday’s near 500 point decline in the closing 30 minutes, would suggest to me that much of this week’s fall was due to automated/algorithmic trading – and while I appreciate that this volatility is unnerving, it is important to maintain a long-term perspective and resist the urge for any knee-jerk reactions as previous sharp automated sell-offs have proven to be good buying opportunities.

Elsewhere, yesterday was ‘Super Thursday’ in the UK – one of the BoE’s four big policy days in the year when we get: the BoE’s interest-rate decision; the quarterly growth and inflation report is published; and Mark Carney, the BoE Governor, holds a press conference.

Although the BoE kept interest rates unchanged at 0.5% in a unanimous 9-0 vote, the message was hawkish: given higher economic growth forecasts, interest rates may need to rise “somewhat earlier and to a somewhat greater extent” than that forecast by the BoE last November!

Although we know from previous statements that Mark Carney does like to flip-flop, the problem is that this statement increases the risk that the BoE boxes itself into a corner and will be forced to either increase interest rates or loses credibility.

I don’t want to sound like a broken record, but I think increasing UK interest rates would be a big policy error. It seems crazy to me, to be considering increasing interest rates at a time when the consumer is being squeezed and the housing market is slowing; not to mention all the Brexit uncertainty – I wonder if Mark Carney has read any of this week’s newspaper articles on the leaked Government’s Brexit-impact studies which showed that the UK will suffer a decline in GDP after Brexit, regardless of the terms of its departure from the EU?

This coming week, the main focus will be on US CPI inflation (December’s core CPI was 1.8%). We also have UK CPI,PPI and retail sales, along with eurozone and Japanese Q4 GDP.