Global equity prices fell this week in a classic knee-jerk reaction to higher US bond yields following a hawkish Fed statement and strong US employment data.

Having spent the last four years being dovish, in her final monetary policy meeting, Janet Yellen, the Fed Chair, was relatively hawkish – giving an upbeat assessment on both the economy and inflation. Although the Fed didn’t change US interest rates this week, the statement sets the stage for a March interest rate increase under the new Fed Chair, Jerome Powell (who will be sworn in on Monday 5 February 2018). 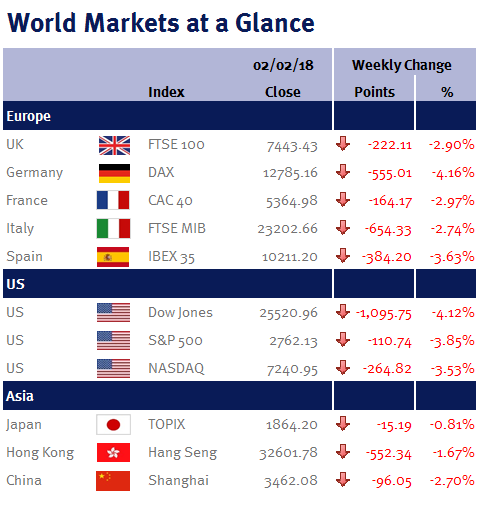 And today’s (2 February 2018) US employment data reinforced this expectation. Non-farm payrolls gained 200,000 (versus expectations of 180,000). However, the really big surprise was the 2.9% year-on-year increase in average hourly earnings – the largest increase since June 2009. Whilst this probably reflects the tax reform induced employee bonuses and pay-rises that I wrote about two weeks ago (please see here), speculation is rife that this is the first signs of a tightening labour market. The only disappointment was the drop in average weekly hours worked which fell from 34.5 to 34.3 – however, this was highly likely due to the effects of the unusually cold weather and snow bomb cyclone at the beginning of January (please see here).

In the UK, the BoE Governor, Mark Carney stated that slack in the UK economy is easing and that the BoE focus can now switch to inflation. This is strange given that he also stated that business investment is likely to be 4% lower than it would have been had the UK voted to remain in the EU or that the IMF expects that the UK’s economy will grow by just 1.5% this year, compared to 2.2% for the eurozone and 2.7% for the US. For information, this coming week we have the BoE’s interest rate decision and Inflation Report.

While I appreciate that the path of US interest rates may steepen slightly following Donald Trump’s massive tax cuts, market speculation (lead by Morgan Stanley strategists) of 5 increases this year seem wide of the mark. Although economic readings are strengthening, the pickup is insufficient to validate the idea that inflation is going to rapidly accelerate (the Fed’s preferred inflation measure, the core PCE, was unchanged in January at 1.5%).

And while this week’s sell-off is unwelcome, it is hard to argue that it wasn’t justified given the aggressiveness of the recent rise. However, as the drivers of the rise (synchronized global growth, historically low interest rates/inflation and a US tax windfall) are still present it is important not to get distracted (or bearish) by an overdue correction.