Between the US government shutdown and the World Economic Forum in Davos, this week’s news stories have been filled with the world’s powerful and elite from both Capitol Hill and the Swiss Alps.

The US government shutdown which started at midnight on Saturday (20 January 2018) was all over by Monday evening (22 January 2018)! And the economic impact of such a short-term shutdown will be insignificant. 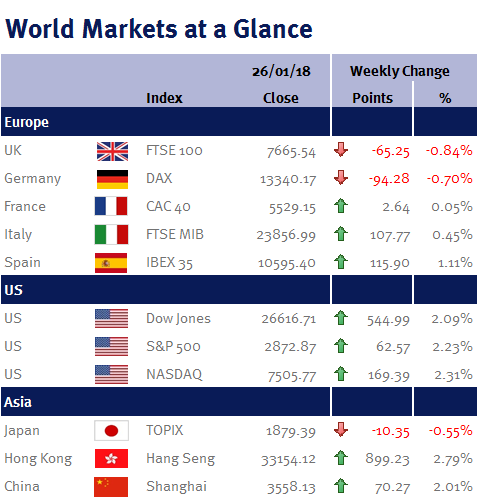 And as for WEF, it was full of excitement this year thanks to Steven Mnuchin, the US Treasury Secretary and Haruhiko Kuroda, the Bank of Japan Governor.

Steven Mnuchin endorsed a weaker US dollar – and as a result, the dollar fell 2.4% from $1.386 to $1.4192 against sterling. Not only will a weaker dollar help support US growth, it is good for US exports, which should help the US close its current account deficit (as a weaker dollar will make US exports cheaper and therefore more competitive, while at the same time increasing the cost of imported goods – protectionism by the back door).

Haruhiko Kuroda stated that while Japanese inflation is likely to increase toward the BoJ’s 2% target, it was far too early to consider any change in monetary policy. The dovish statement saw the yen appreciate strongly.

Elsewhere, US Q4 economic growth came in a touch lower than expected at an annualised rate of 2.6% in the final quarter of 2017.

However, US markets brushed this aside as a raft of US corporate earnings announcements (80 from the S&P 500 to be precise) were unsurprisingly positive. So far, 133 of the S&P 500 companies have reported their Q4 earnings. Of these companies, 81.2% have reported earnings above estimates and in aggregate, earnings are up 10.86% (2.21% above expectations). Additionally, Goldman Sachs recently increased its 2018 earnings and dividend growth forecast for US equities as a result of the tax reform to 14% and 10.4% from 9% and 7.4% respectively.

At the ECB meeting, policymakers kept rates unchanged and reaffirmed its QE timetable ($30bn per month from January 2018 for at least 9 months). However, according to the accompanying statement, there was debate over when they should change their wording/tone – either March or June – with the June camp wanting more evidence that inflation is going to pick-up (there is currently no evident cost pressures within the eurozone as core CPI inflation is just 0.9%).

This coming week we have a Fed monetary policy meeting, the Fed’s preferred inflation measure (the PCE), US employment data (non-farm payrolls; unemployment rate; the participation rate; and average earnings) and Donald Trump’s State of the Union address (it is speculated that he will push his massive infrastructure spending plans). We also have another busy week for US earnings, with Alphabet, Amazon, Apple, eBay, Facebook, Microsoft and PayPal all reporting. Additionally we have Eurozone Q4 GDP and CPI.