Global equities got off to a great start to the new year amid signs that the non-inflationary global economic expansion continues to gain momentum.

Minutes from the last Fed monetary policy meeting indicated that policymakers debated the risks to the US economy, with some emphasising low US inflation, while others pointed to the robust economic growth potentially getting a further boost from Donald Trump’s tax cuts. 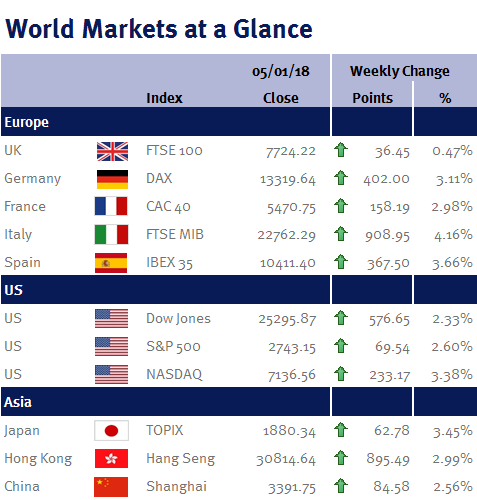 However, to me the minutes had a slightly dovish tone, and as such I wouldn’t be surprised if the timing of this year’s three indicated US interest rate increases are pushed out very slightly (the market is currently expecting the first quarter point increase to come in March 2018), especially after today’s US payroll data showed that employers added just 148,000 workers (compared to consensus estimates of 190,000). Additionally, the current cold weather and snow bomb cyclone in the US could well impact the payroll data in the coming weeks – and potentially slow Q1 economic growth.

Elsewhere, the ECB’s 2% inflation target remains elusive, as eurozone CPI slowed to 1.4% in December from 1.5% in November, while the core reading was unchanged at 0.9%. Hopefully, this will quieten those ECB policymakers who have been pushing for an end to crisis-era stimulus measures.

This coming week, we have a number of Fed policymakers speaking along with US retail sales and CPI data and minutes from the ECB’s last monetary policy meeting.