It has been a busy week for central banks. On Wednesday we saw Janet Yellen perform what is likely to be her final press conference as US Federal Reserve (Fed) chair following the Fed’s monthly meet and rate decision. Whilst the Fed did raise rates by a further 0.25% (to 1.5% at the upper bound) this was fully expected and priced in to the markets. However, it is all about the detail Yellen gave at the preceding press conference! Despite a rise in rates, Yellen expressed caution over inflation rates throughout 2018 whilst also expecting the headline unemployment rate to drop from 4.1% to 3.9%… this appears to be a contradiction in terms as higher employment levels should lead to higher wages, increased spending and ultimately higher inflation. When questioned on this she ‘skirted’ around the question. Let’s face facts; with the participation rate near historical lows, there appears to be a lot of slack and inaccuracy to the unemployment number, so in reality predicting a decrease to 3.9% appears somewhat meaningless without justification. In addition, it also supports rates remaining at lower levels until employment data tightens and inflation data becomes clearer. With all of this in mind, and following recent detail on US tax reform from US president Donald Trump, it looks like the domestically focussed businesses stand to gain. In addition, Wednesday saw Trump state that the US public would receive a meaningful tax cut for Christmas. Of course, we await the detail of what he meant, as always, but any significant public tax cut could aid inflation and again the domestics. 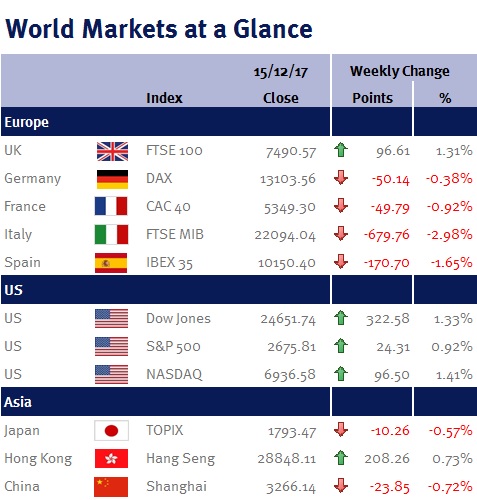 The Bank of England policy announcement was on Thursday seeing its Governor Mark Carney and co keep interest rates at 0.5%. This was very much expected with November’s hike being seen as a reversion of last year’s emergency cut. This is compounded when we look at Tuesday’s inflation number that came in above expectation at 3.1%, forcing Mark Carney to write a letter to the Chancellor (Phillip Hammond) to explain why inflation is significantly above the 2% target. With this in mind, in order to keep the consumer spending and keep debt levels manageable, a further rate rise seems quite some time off. All of this runs tangent to the uncertainties of Brexit, where we have plenty of news, but very little by way of data… and whilst it appeared that we had seen some agreement between the UK and the EU over exit terms, it remains fragile with the big question of trade terms still a huge unknown.

The ECB completed the trio of major western central bank meetings last week. The head of the ECB, Mario Draghi, announced policy was to remain unchanged. In the following press conference, whilst Draghi seemed slightly dovish on inflation, he did very little to offend the markets restating the plan to reduce asset purchases (quantitative easing) to €30B from €60B starting in January 2018. However, the key to the speech was him again reiterating the ECB’s loose stance on policy, suggesting interest rates will remain low for the foreseeable, and that thy would remain accommodative in respect of policy. This is a buoy for European markets heading into and throughout 2018!

In other regions we saw a surprise move by the Peoples Bank of China to tighten policy by raising interest rates and in India, inflation came in higher than expectation suggesting stronger than expected demand within the economy.

Of course, one of the most significant news pieces this week is the release of ‘Star Wars: The Last Jedi’… but you’ll get no spoilers from me!