US jobs data was more of the same: job growth was robust but wage gains tepid. Non-Farm Payrolls rose 228,000 (beating forecasts of 195,000) and while average hourly earnings increased 2.5% from a year earlier; it was less than the 2.7% economists had projected. Additionally, October’s figure was revised down from 2.4% to 2.3%. 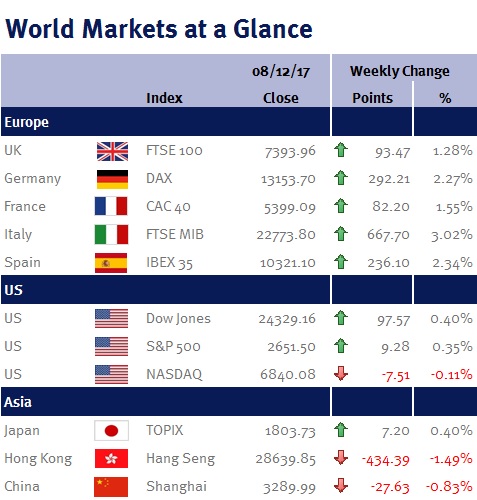 While the employment data was not as bullish as the market had been expecting and is not great news for the Fed (as they have been expecting wages to pick up, which will in turn lead to higher inflation), it is unlikely to change the Fed’s recent statement that they will raise interest rates “in the near term” (i.e. most likely during their meeting next week, as the sizeable payroll gain indicates that there was substantial monetary wage generation in the US economy during November). However, the tepid wage growth reading suggests to me that the Fed may not need to rush to aggressively increase interest rates thereafter – and this all plays into my Goldilocks scenario (as the Fed won’t be forced into an aggressive interest rate rise cycle, yet the strong job gains coupled with record-low unemployment rates means there will be continued GDP growth).

Also, helping US sentiment this week was news that the US government avoided a shutdown after Congress passed legislation to maintain funding for two weeks to allow lawmakers until Friday 22 December 2017 to overcome differences.

Incidentally, I am very confused by all the talk that Canada’s deal with the EU is seen as the preferred model for the UK, as Canada has no access to the banking passport system that the UK needs to allow banks and financial services to trade freely.

Additionally in the UK, while at first glance the British Retail Consortium’s 0.6% sales gain in November looks very encouraging and partly reverses October’s 1% decline, the breakdown clearly illustrates the current squeeze on household purchasing power, as the rise was due to higher food spending (i.e. essential spending), which rose 2.8%, while non-food sales (i.e. non-essential/discretionary spending) actually fell 1.2%. And as the consumer accounts for around 60% of the UK economy this will clearly act as a drag on the economy – and only increases my conviction that the BoE is unlikely to increase interest rates again anytime soon.

Monetary policy meetings will dominate markets this coming week as policymakers from the BoE, Fed and ECB meet to set interest rates (although only the Fed is expected to change policy – please see my comments above). We also have plenty of other data from the UK and US, with both releasing PPI, CPI and retail sales data. Additionally in the UK, we have unemployment data.