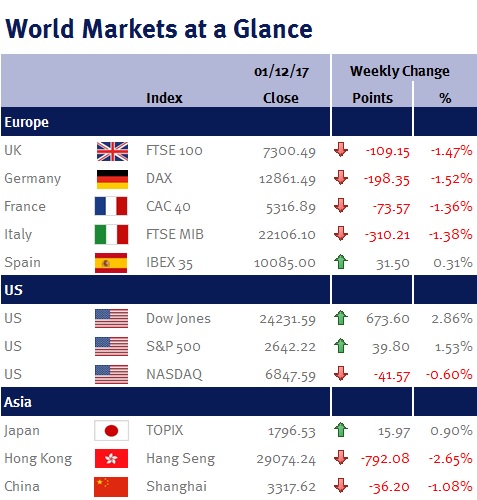 US equity markets rose this week, helped by optimism that the US tax reform bill will progress and solid US economic data (Q3 US GDP was revised upwards from the 3% reported last month to 3.3%).

Additionally, sentiment was helped by Jerome Powell’s confirmation hearing on Tuesday (28 November 2017) as he signalled continuity under his chairmanship. While he expects the Fed will continue raising interest rates and trimming its balance sheet under his leadership, he did state that inflation will determine the pace – and given this week’s data release of the Fed’s preferred inflation measure, the PCE, didn’t really move the needle (headline PCE was unchanged at 1.6%, while the core PCE ticked up slightly to 1.4%), suggests to me that US interest rates may not need to rise as much as the Fed has recently indicated.

However in the UK, this week’s progress in Brexit negotiations shifted expectations from a hard to a soft Brexit (and a soft Brexit means better economic growth). This resulted in some speculation that the next increase in interest rates may now be sooner rather than later – I find this slightly puzzling as a soft Brexit would probably result in a stronger pound and lower inflation (which would push out expectations for another interest rate increase).

Additionally, I think the market is being very fickle and may have jumped the gun. While the EU may now be prepared to start trade negotiations, there is still a lot to be resolved (the obvious ones being the Irish border and the ECJ) and therefore negative headlines could quickly and easily return (especially as the DUP could walk away from its support for Theresa May and the Conservative party – potentially resulting in a snap general election).

Nevertheless, this week’s optimism on Brexit progress drove the pound higher and as a consequence the FTSE-100 lower (around two-thirds of the FTSE-100’s total revenue is derived from abroad – so a stronger pound provides both a headwind to exporters and those companies with significant overseas earnings).

Elsewhere, Germany edged slightly closer toward a new government after Angela Merkel laid out a potential path to another alliance between her CDU party and the Social Democrats.

This coming week’s major economic data release is Friday’s (8 December 2017) US employment report (non-farm payrolls; unemployment rate; the participation rate; and average earnings) which will be carefully scrutinised as the last two reports have been heavily distorted by hurricanes, especially as the Fed has hinted that it is likely to increase US interest rates when they next meet on 12-13 December 2017. Other economic data releases to look out for include: PMI data from the UK, US and China; and UK industrial and manufacturing production.

Additionally, Theresa May lunches with Jean-Claude Juncker on Monday (4 December 2018); while US politicians will continue to negotiate the US debt ceiling, given that government funding is set to expire on Friday (8 December 2017) and without an agreement, a partial government shutdown is possible.