While I feel obliged to comment on the breakdown in German coalition talks, in reality it had little impact on equity markets. Even if it takes a few more weeks to reach an agreement, Angela Merkel is likely to be at the centre of the government – and that’s the key for equity markets. Additionally, European’s are more used to living with coalitions than the British. After all, Dutch elections earlier this year resulted in over 200 days of negotiations before a 13-party coalition was formed with a majority of just 1-seat! Additionally, following the Belgium general election in 2010, it took over 500 days of negotiations to form a government. 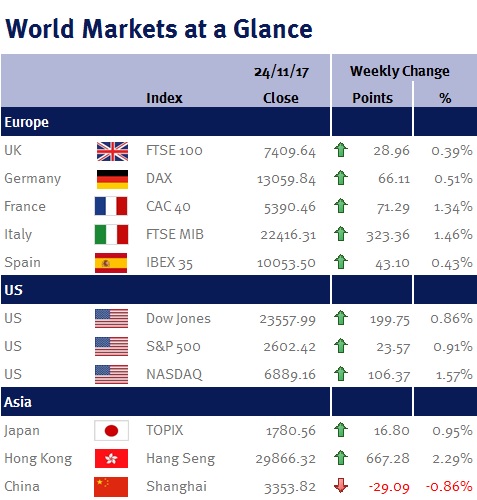 Wednesday’s (22 November 2017) UK budget was clearly a difficult one for Philip Hammond given weaker public finances and demands for more spending. And while the giveaways weren’t massive, had the Chancellor delivered this budget back in March, the result of the June general election may well have been very different as it was voter friendly: abolishing stamp duty for first-time home buyers; extra cash for the health service; and improving the delivery of Universal Credit. Additionally, in the subsequent Treasury Budget document we learnt that Philip Hammond plans to start divesting the government’s 70.5% holding in the Royal Bank of Scotland (worth nearly £23bn) to help meet the government’s fiscal targets.

According to the minutes from the Fed’s meeting on 31 October – 1 November, policymakers were upbeat on economic growth and are ready to raise interest rates “in the near term”. This is a pretty clear signal that US interest rates will be increased during their next meeting on 13 December 2017 despite the fact that US inflation continues to run below their 2% target.

In a separate announcement, it was confirmed that Janet Yellen will leave the Fed once Jerome Powell is sworn in. Additionally, she cautioned that raising US interest rates too quickly risked stranding inflation below the Fed’s target (which if she wasn’t leaving, would suggest to me that she may be finally accepting that inflation expectations are drifting down). Unfortunately, her departure will create a fourth vacancy for Donald Trump to fill, making it trickier to be confident on the Fed’s interest rate trajectory for 2018 and 2019, as several Fed policymakers see the need for ‘normalisation’ to give the Fed some ammunition in the future.

Next week Jerome Powell’s confirmation hearing begins as well as the second print on US Q3 GDP, the Fed’s Beige Book, eurozone unemployment and eurozone CPI.