There was very little economic data action this week.

The eurozone’s economic recovery was underlined after retail sales climbed 0.7% in September, taking its 12 month growth rate to 3.7% (its highest level since July 2015), helped by a 5.1% increase in non-food products. 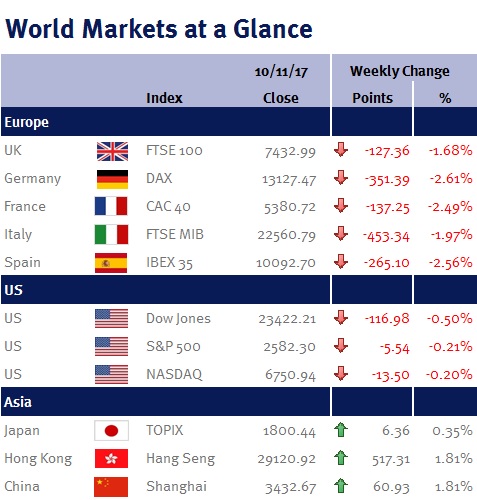 In contrast, the British Retail Consortium said UK retail sales fell 1% in October. Adding to the gloom, Barclaycard said household spending slowed to the weakest in more than a year last month.

However, I should point out that retail sales data is notoriously volatile and as a result, October’s fall could either be due to the squeezing of household purchasing power, or it could be that UK consumers are being savvy and simply holding back and waiting for the Christmas season (in the last few years sales promotions have been brought forward from the traditional January/New Year sales to late November thanks to ‘Black Friday’ promotions).

Thankfully we have a busier week ahead for economic data. In the UK we have CPI, PPI, employment data (including wage growth) and retail sales (this time from the Office of National Statistics). Elsewhere we have US CPI, PPI, retail sales, housing starts and the latest initial jobless claims number; eurozone CPI; and Chinese retail sales and industrial production.