This week’s UK interest rate increase was a fait accompli after BoE policymakers recently intimated that an interest rate rise was on the cards.

Although Mark Carney dressed up the first increase since 5 July 2007 (when the world was a very different place) as a removal of stimulus and that the time had come for the BoE to take its foot off the accelerator, personally I have serious misgivings with this increase given negative real wages and Brexit uncertainty. 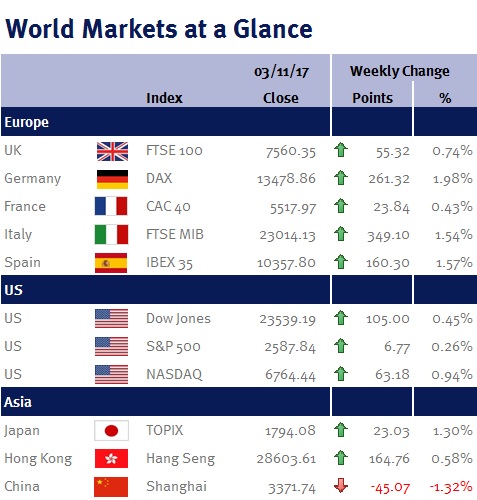 While Mark Carney suggested that even more tightening is ahead, thankfully this interest rate decision wasn’t unanimous (policymakers voted 7-2 for the increase, which is hardly decisive). Consequently, I believe yesterday’s (2 November 2017) unusual increase will be its last for some time – I am certainly not assuming that we are at the start of a traditional interest rate hiking cycle. While I fully appreciate that the UK economy is growing, it is doing so at a feeble rate (and lagging behind its global peers) and while CPI inflation is running above the BoE’s 2% target, this reflects the decline in the value of the pound since the EU Referendum and the subsequent exchange rate pass-through (a weaker pound increases the cost of imported goods), rather than domestically generated inflation.

In contrast, the BoJ left its monetary stimulus program unchanged and trimmed its inflation forecasts, echoing last week’s ECB’s cautious tone, while the Fed left US interest rates unchanged. With the exception of highlighting the potential hurricane-related impact, the accompanying Fed statement was very similar to its last one: gradual increases in US interest rates are warranted by “solid” (previously the Fed used “moderate”) US economic growth despite the fact that core inflation “remains soft”. This suggests that the Fed is gearing up to increase interest rates at their next meeting on 12-13 December 2017.

Donald Trump nominated Jerome (Jay) Powell to replace Janet Yellen as the next Fed chair when her term ends in February 2018. The announcement was taken well as Jay Powell is not only well respected but he will provide continuity and predictability with Janet Yellen’s policies (he is seen as a dove and has indicated that the recent softness in inflation should allow the Fed to be patient in raising interest rates). However, with a number of vacancies on the FOMC board, the tilt could easily move to a more hawkish direction with other appointments.

This week’s eurozone inflation clearly showed why the ECB was right to keep its QE programme running last week (please see here). While eurozone Q3 GDP growth of 0.6% took the year-on-year expansion to 2.5% (the best since reading March 2011), a sustained price pickup remains elusive as the core eurozone CPI inflation (which excludes volatile items such as food and energy and is seen as a signal of where headline inflation will head), slowed in October to 0.9% from 1.1% in September.

However, this data further develops the Goldilocks scenario which I have previously written about: falling unemployment, buoyant (but not overheating) economic growth, and low inflation (core and headline) – the perfect recipe for a continuation of monetary stimulus.

It is a quiet week ahead: eurozone PPI and retail sales is the only economic data of any interest.