If BoE policymakers were minded to increase interest rates at their next meeting (1-2 November 2017), there was nothing in this week’s GDP data to change their minds, as the UK economy grew 0.4% during the last quarter – beating expectations of 0.3% growth. 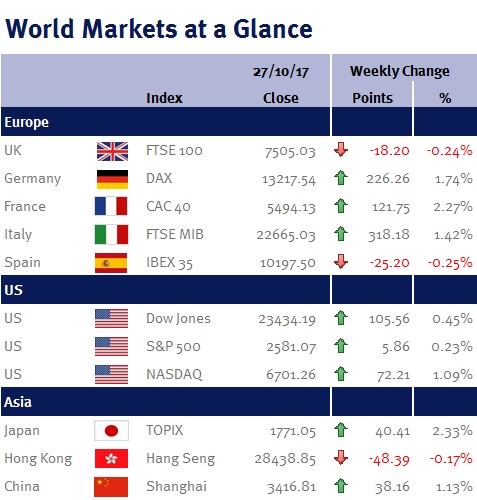 Donald Trump’s proposed tax cuts moved a step closer after the House of Representatives passed a budget resolution, while the US also reported its strongest back-to-back quarterly growth in three years with Q3 growth of 3% (following Q2’s 3.3% growth). As a consequence, whoever Donald Trump chooses as the next Fed chair, a December interest rate increase now appears inevitable.

Elsewhere, Shinzo Abe’s Liberal Democratic Party won a convincing two-thirds majority in Japan’s general election on Sunday (22 October 2017). The market reacted positively to the news, with the Nikkei 225 Index hitting levels last seen in 1996, while the yen weakened (as the victory paves the way for more monetary stimulus).

However, the ECB’s QE tapering update was the main event this week – and while the ECB did confirm that it was reducing its stimulus, there were plenty of asterisks!

The ECB’s current QE program will continue to run until the end of the year, when purchases will be cut in half to €30bn a month for nine months. However, the ECB confirmed that QE wouldn’t suddenly stop next September – suggesting that QE is currently open-ended. Plus, because the ECB also said that it would continue to reinvest the proceeds from maturing QE bonds, the €30bn per month will, in reality, be nearer to €45bn per month. Additionally, the ECB also confirmed that it would increase the size or duration of QE if the eurozone economy doesn’t improve enough or inflation remains too sluggish.

Furthermore, the ECB said that it would keep interest rates at their current level “well past the end of QE”, suggesting that we potentially may not see higher European interest rates until 2020.

We have a busy week ahead. In the UK, 2 November 2017 is ‘Super Thursday’ – so called because the BoE reveals its economic outlook, latest interest rate decision and publishes the minutes from its last monetary policy meeting.

Additionally we have a Fed and BoJ monetary policy meeting; US non-farm payroll data; eurozone CPI and Q3 GDP; and UK, US, eurozone and Chinese PMI data.