There was lots of excitement over this week’s (Tuesday 17 October 2017) UK inflation data, after recent comments from Mark Carney, the Governor of the Bank of England, indicated that an interest rate rise would be needed in the coming months. 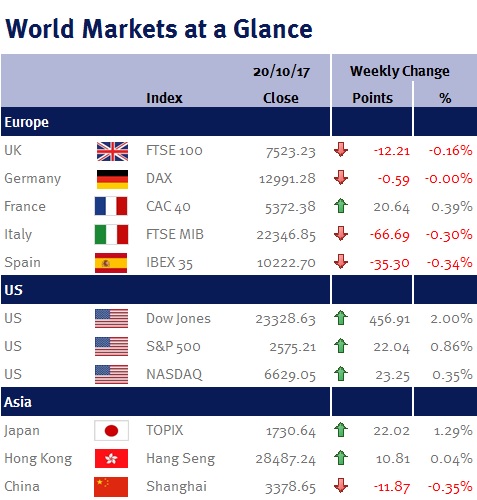 And although the headline CPI number, which came in at a 5 ½ year high of 3% (up from 2.9%), made great headlines and does give the BoE all the excuses it needs to increase rates at their next meeting on 1-2 November 2017, it should be noted that core CPI was unchanged at 2.7% – supporting my view that there is little evidence of domestically-generated inflation as most of the higher CPI rate reflects the transitory impact of the pound’s depreciation since the EU Referendum.

On Wednesday (18 October 2017) China’s President Xi Jinping gave a marathon 3 ½ hour opening speech to the China Communist Party Congress. So far the congress, which takes place every 5 years and runs into next week, has been light on specifics and heavy on big-picture ideology. Separately, it was announced that China’s GDP growth in Q3 came in at 6.8% year-on-year, down slightly from 6.9% in Q2, while retail sales were 10.3% higher over the year.

In the US, the Dow Jones Industrial Average this week broke through the 23,000 level for the first time, helped by better than expected corporate earnings, Donald Trump’s reiteration of his pledge to cut taxes, the Empire State Survey reading (which indicated that Q4 manufacturing activity has started strongly) and the Fed’s Beige Book (which said that the US economy continues to grow at a modest to moderate pace despite some disruptions from a series of hurricanes).

Interestingly, the market reaction to the political turbulence in Spain continues to be muted. However, plans by the national government in Madrid to proceed with suspending Catalonia’s autonomy coupled with calls from the Catalan separatists to get supporters to withdraw their cash from the Spanish banks, might finally wake markets up to the growing seriousness of the crisis, as it seems counter-intuitive to believe that the 2.3m people that voted for independence will passively accept losing all their autonomy.

Next week the spotlight will be on the Japanese election (Sunday 22 October 2017), UK GDP data (Wednesday 25 October 2017), the ECB monetary policy meeting (Thursday 26 October 2017) and then Friday’s (27 October 2017) US Q3 GDP and PCE. Additionally, we will have earnings statements from a number of the tech giants including Amazon, Alphabet (Google) and Microsoft.