Data this week showed how much more the UK imports than it exports as the trade deficit continued to widen despite the large depreciation in the pound since the EU Referendum vote last June. And although there is a risk that the UK is miscalculating how far Europe is willing to compromise after Theresa May’s government ‘hardened’ its negotiating stance this week by saying that they were preparing for a “no-deal” Brexit outcome (as a hard Brexit would be negative for the UK), this trade data clearly shows that the eurozone will also suffer badly (and should hopefully give the EU an incentive to compromise).

Elsewhere in Europe, Spanish equities traded higher after Catalonia’s president offered talks with Madrid while claiming a mandate to trigger secession. Overall, as with last week (please see here), the market reaction to the political turbulence has been muted – which is not a surprise, given the European Commission is backing the Spanish Prime Minister, Mariano Rajoy’s position on Catalonia, and reinforces the view that Catalonia is isolated within the EU. 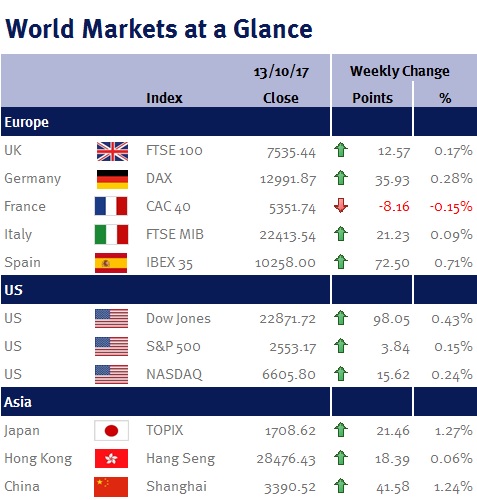 However, the highlight of the week was the minutes from the Fed’s last monetary policy meeting held on 19-20 September 2017 which were released on Wednesday 11 October 2017. Of interest was the debate surrounding the drop in core inflation and interest rate-path projections. As expected, many policymakers saw reasons for another interest rate increase this year, but some were worried that the shortfall in inflation may be more than transitory. This would suggest that a December increase could be data dependent (i.e. economic data between now and their meeting on 12-13 December 2017 needs to provide the policymakers with the confidence that US inflation is moving upwards toward their 2% target).

And this week finished (Friday 13 October 2017) with the release of US CPI inflation data for September. The report was clearly impacted by a spike in energy prices after the recent hurricanes as headline inflation picked-up to 2.2% (up from 1.9% in August), as core CPI (which excludes volatile items such as food and energy and is seen as a signal of where headline inflation will head) was unchanged at 1.7%.

Consequently, another interest rate increase this year is far from certain – especially given a number of Fed policymakers were speaking this week: Robert Kaplan, the Dallas Fed President, said he wants to see more signs of upward inflation before raising interest rates and repeated his concern that globalisation and technology is keeping US inflation muted despite near-full employment, while Chicago Fed President Charles Evans said a December interest rate increase was not a done deal and that the key for the Fed is to deliver 2% inflation on average and not have it as a ceiling.

Next week there are lots of exciting data releases to look out for from China and the UK (which will provide clues on the outlook for UK interest rates). UK data includes: CPI; employment/earnings data; and retail sales. Chinese data includes: CPI; GDP; retail sales; and industrial production. Additionally, we have eurozone CPI; the US Empire Manufacturing survey; and the Fed’s Beige Book. And on Monday (16 October 2017), we have Madrid’s deadline for clarity on Catalonia’s independence claim.